Forget The Car Keys — This Commute Requires A Paddle

This story is part of a project on commuting in America.

We all know what it's like to be stuck in traffic. But what about paddling under it?

For kayak commuter Stephen Linaweaver, there is no rush hour or gnarly gridlock. His biggest commute worry is a really big ship.

Linaweaver kayaks from Oakland, Calif., to his job as a sustainability consultant in San Francisco. His hourlong commute begins at the Port of Oakland each morning at 7.

"So, I basically put all my work clothes in here, in this dry bag; and then I bring this flag, because you're actually really low in the water, and with waves and a blue boat, no one can see you," Linaweaver says.

There may be someone else who paddles a whitewater kayak from Oakland to San Francisco to get to work. But in four years of commuting this way, Linaweaver's never seen him. What he does see are some of the hundreds of cargo ships that pass through the bay each day. He usually knows where in his trip he's likely to encounter them, but still, he says, "it's kind of like a little bit of early morning human frogger."

Dodging the ships can be unnerving, but otherwise, his trip is calm, filled with the sounds of lapping water and far-off noises.

"You can hear the train whistle of the Amtrak, foghorn from Alcatraz, and there's a lot of cars on the Bay Bridge," he says.

His route may not be shorter than yours — but yours probably doesn't include harbor seals. 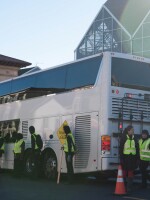 Casey Miner
Casey Miner is an audio producer and senior editor for KALW’s award-winning news, arts, and culture program Crosscurrents. She’s contributed work to NPR, Marketplace, Mother Jones, The Takeaway, Transportation Nation and PopUp Magazine. If you like rollover fires, fermenting cabbage, and/or taxidermy-in-progress, she suggests you also check out The Field Trip Podcast. Casey is a graduate of the UC Berkeley Graduate School of Journalism and enjoys talking with people at length about what exactly they do all day.
See stories by Casey Miner
Latest Stories
Support news that matters in Kansas City
KCUR serves the Kansas City region with breaking news and powerful storytelling.
Your donation helps make non-profit journalism available for everyone.
Donate Now