ALAN CHEUSE, BYLINE: Lemuel Gunn - sounds like the weapon but spelled with two N's - a former New Jersey homicide detective turned CIA field operative, has put the murderous Afghanistan war behind him, pushed out of the agency actually because of refusing to go along with a battlefield cover up. He settled into a tricked-up mobile home outside of Las Cruces, New Mexico, and he's seeking work as a private investigator.

As Gunn tells us the story in the diction and spirit of an old-fashioned PI, he's got a part-time female accountant he's sleeping with part-time but little cash for her to count. So when an unusual young woman appears at his trailer to ask for help, he can't help but say yes. Her name is Ornella Neppi. She's a puppeteer by profession who's working in her ailing uncle's bail bond business, or so she explains. She wants Gunn to find Emilio Gava, a bail bond client of hers, a man arrested on a drug charge who skipped town, leaving Ornella owing the government $125,000 bond fee.

Gunn needs his fee, so he takes on the case, and thus begins a journey from Eden - actually the east of Eden Garden's gated condo community in nearby Las Cruces where the missing Gava lived - to Chicago, to the desert outside Las Vegas, with a few flashbacks in Gunn's snappy, sharply detailed and classically intoned detective yarn that takes us back to the troubles on the Afghan battlefield that led to his dismissal from the company.

I better shut up now because I want to rave about the plot, but I don't want to spoil any of it for you. But then, Littell is so gifted a creator of intelligent entertainment that I could give away almost everything and still not spoil your pleasure in reading this neat, new genre novel by one of our best. 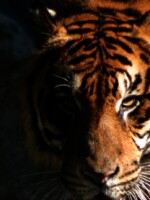 Alan Cheuse
Alan Cheuse died on July 31, 2015. He had been in a car accident in California earlier in the month. He was 75. Listen to NPR Special Correspondent Susan Stamburg's retrospective on his life and career.
See stories by Alan Cheuse
Latest Stories
Support news that matters in Kansas City
KCUR serves the Kansas City region with breaking news and powerful storytelling.
Your donation helps make non-profit journalism available for everyone.
Donate Now