Run River North is a band that's gotten a few more breaks than most on its level. Last year, the Los Angeles-based Korean-American musicians produced a music video from inside their Hondas. The video went viral — and straight to the carmaker. The company rewarded the group with a surprise performance on Jimmy Kimmel Live.

Before the band landed on the popular late-night program, Run River North had already been approached by a major label.

"We got flown out to New York, and wined and dined. We didn't even know that still happened," says Alex Hwang, the band's lead singer and songwriter.

But things didn't work out quite as they imagined. After the band's appearance on Jimmy Kimmel Live, the contract offers slowed, then eventually stopped coming in.

After the unexpected setback, Hwang and his five bandmates dedicated any free time they had — in between full-time jobs or full-time classes at Cal State — to songwriting, producing and promoting their music. They built a local following and eventually sold out LA's Troubadour, a hot live-music venue for up-and-coming artists.

A few gigs later, an offer came from Nettwerk, the Canada-based label that signed the band fun. Run River North is set to release its debut through the label early next year.

Guitarist Daniel Chae says playing music for a living is something none of his bandmates expected to be doing a year ago — and that their parents would likely agree.

"Our parents sacrificed their lives for us, and I think that's why there's such a strong sense of family in each of us," says Chae. "There is that expectation of, 'Because we did this for you, we hope you have a good job. We hope you can live the American dream.' And we finally find that in music now." 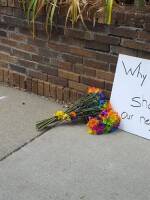 Doualy Xaykaothao
Doualy Xaykaothao is a newscaster and reporter for NPR, based in Culver City. She returned to NPR for this role in 2018, and is responsible for writing, producing, and delivering national newscasts. She also reports on breaking news stories for NPR.
See stories by Doualy Xaykaothao
Latest Stories
Support news that matters in Kansas City
KCUR serves the Kansas City region with breaking news and powerful storytelling.
Your donation helps make non-profit journalism available for everyone.
Donate Now