A View From China, India On Carbon Dioxide Emissions

Well, let's hear from some of the rest of the world. We're gonna go to China and India and to NPR correspondents in those countries, beginning with NPR's Anthony Kuhn in Beijing. Hi, Anthony.

INSKEEP: Okay. So the Chinese declined to agree to controls on their carbon emissions, but is this a major priority for China?

KUHN: Absolutely. It's a matter of key national interest to them. It's a matter of national security. Look at all the protests that happen every year because of pollution. When it shuts down a city, it looks bad for the government. They are talking about more market mechanisms, and that means reflecting environmental costs in prices of fuel and other products.

They're also talking about judging the performance of local officials based not just on their economic growth numbers, but also on how they do on protecting the environment, and that is something that has not been done before.

KUHN: Well, I think China would like to lead in the renewables field, but I also think they expect the U.S. to be fair and to deal in good faith. And that means when the U.S. says it's going to contribute to a green climate fund to pay developing nations to control their pollution, they expect the U.S. to do it; otherwise why should they?

INSKEEP: Of course, there's been a lot of attention, at least in the media, toward Chinese efforts on climate change. We just heard about some. What about in India?

MCCARTHY: Well, in sun-drenched India they're really trying to push solar power, for example, but on many days you can't see the sun here, Steve. You look out the window on a winter's day and it's not lost on Indians who see their air that looks every bit as bad as Beijing's. Respiratory illnesses are rising, more children are afflicted with asthma.

But for India, development is trumping a clean climate. A third of the population still lives on a $1.25 a day and air quality isn't the biggest priority. You also have 400 million people who aren't even on the energy grid. What does that mean? It means that they burn wood and dung or coal to keep warm and to cook their food. By the same token, India says, look, our carbon footprint is pretty small, where the average person in China now emits roughly the same amount of carbon dioxide as the average European.

Indians are just a fraction of that. But when you have 1.2 billion people, that's a huge total in the end and they're now 4 percent of the cumulative fossil fuel emissions in the world.

INSKEEP: Julie, I want to pick out one number of those numbers you gave, 400 million people not yet on the power grid. That's more than the population of the United States. It's a developing country. I gather they're going to go on the power grid and how they get electricity is going to have a huge impact on the world.

MCCARTHY: That's exactly right. They need to convert their coal-generated energy plants into something cleaner. That's a huge polluter here. They need help developing public mass transit. The cars are choking them. The good news, I think, Steve, for India is that its development is in the early stages. It can still develop more cleanly, but it needs new technologies to do that. They need help in phasing out HFC used in air conditioners as refrigerants.

I mean Indians want to be cooled just like the rest of the world. And again, you return to that question of equity.

INSKEEP: NPR's Julie McCarthy is in Delhi. NPR's Anthony Kuhn is Beijing. Thanks to you both. 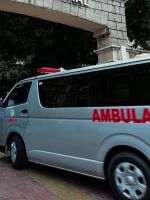 Julie McCarthy
Julie McCarthy has spent most of career traveling the world for NPR. She's covered wars, prime ministers, presidents and paupers. But her favorite stories "are about the common man or woman doing uncommon things," she says.
See stories by Julie McCarthy

Anthony Kuhn
Anthony Kuhn is NPR's correspondent based in Seoul, South Korea, reporting on the Korean Peninsula, Japan, and the great diversity of Asia's countries and cultures. Before moving to Seoul in 2018, he traveled to the region to cover major stories including the North Korean nuclear crisis and the Fukushima earthquake and nuclear disaster.
See stories by Anthony Kuhn
Latest Stories
Support news that matters in Kansas City
KCUR serves the Kansas City region with breaking news and powerful storytelling.
Your donation helps make non-profit journalism available for everyone.
Donate Now