One recent evening, some shoppers at the Countryside Market in Belvidere, Ill., were loading up on staples, like milk and eggs. Others, like Meghan Collins, were trying to plan Thanksgiving on a newly tightened budget.

"My work has been cut," says Collins. "I'm working half the hours I used to work. So yeah, I'm making half of what I made last year."

That could be bad news for stores like Countryside, which are already bracing for the ripple effect from the recent $5 billion reduction in the Supplemental Nutrition Assistance Program (SNAP), also known as food stamps. It's the first Thanksgiving since a temporary increase in those benefits expired on Nov. 1, affecting some 47 million Americans.

Countryside manager Craig Schultz says that in a community still grappling with high unemployment, many of his customers rely on the food assistance program to get by.

Countryside is not sure yet just how much the reduction in benefits has cut into their bottom line. But over time, the store says sales might fall between 5 and 10 percent. While that plays out, Schultz wonders if they will sell fewer turkeys this year: "Hopefully not, because I have a whole freezer full of 'em."

To make things a little more affordable, the store has cut some of its prices. Lots of grocers in Illinois may share Schultz's concerns about reduced spending given that some 16 percent of state residents use SNAP benefits; that's 2 percentage points above the national average.

The recent cuts in federal benefits may be felt most in rural areas. That's because data gathered by the U.S. Department of Agriculture, which runs the SNAP program, in 2010 shows a widening gap in participation levels between rural and urban areas. Rural residents are using more aid while city residents are using less.

John Anderson, an economist with the American Farm Bureau Federation, says it's too early to forecast how much of a pinch food retailers might feel in the coming days. But he says there is real concern out there.

"In many rural areas around the country, we do have, proportionately, maybe higher participation in the SNAP program," Anderson says. "And a lot of that gets spent locally, obviously, because that's where it can be spent, in those local grocery stores."

Anderson says a couple of things might happen. Recipients could end up spending less on food and cut out portions of their holiday meal. "The other thing we may see is a change in the kind of things people buy," he says. "Maybe there are some substitutions they can make to make those [food] dollars go further."

For example, a trip to the barber shop or shoe store might be sacrificed to provide a Thanksgiving dessert instead.

John Elliot is a regional spokesman for Kroger, the nation's largest grocery store chain. He says they're monitoring spending patterns in various states. But he says they do believe people affected by the situation will do all they can to put as much food on the table as possible.

"What I think they'll likely do is cut discretionary spending first. And I realize for many households, they may not have a lot of discretionary funds," says Elliot. "But they'll still have to reshuffle priorities. And I suspect that purchases for food will continue to be a priority." 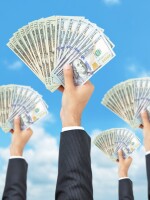 Mike Moen
Mike Moen is the Morning Edition producer and serves as a staff reporter for WNIJ. Every morning, he works with Dan Klefstad to bring listeners the latest Illinois news. He also works with the rest of the news staff on developing and producing in-depth stories. Mike is a Minnesota native who likes movies, history, and baseball. When most people hear his last name, they assume he is 100-percent Scandinavian. But, believe it or not, he is mostly German.
See stories by Mike Moen
Latest Stories
Support news that matters in Kansas City
KCUR serves the Kansas City region with breaking news and powerful storytelling.
Your donation helps make non-profit journalism available for everyone.
Donate Now