The Art Of Letter-Writing Isn't Lost On These Scribblers

When was the last time you wrote a letter?

If the answer is "not recently," then you can count yourself among the millions of Americans who just don't write letters anymore. The post office says the average American home receives only one personal letter about every two months.

But there are a few determined people who are doing their best to wreck that average.

Every day she curls up on her plaid couch in her home in Auburn, Mich., to write a few of her 60 letters for the week.

Bruzewski started her hobby in sixth grade with a single pen pal. Today she writes to friends, family and students she has met in her 50 years as a teacher.

To hear her talk, she'll write to anyone.

"When my kids were in college I wrote them a letter every day," she recalls. "And the joke became that the mailroom would say, 'You guys get mail every day!' So one day I wrote the mailroom."

Bruzewski covers her envelopes in stickers: Turkeys and pilgrims are big right now.

And her handwriting — there's no other way to describe it but pretty.

That aside, she says it's all about the thought.

"I'm sure young people think, 'Ugh, that's so old-fashioned. Who wants to bother with that? It takes too long. You have to think about what you're saying.' That's OK," she says. "And you never know who you're going to connect with or who you're going to meet."

They call themselves A Letter for Better, and their aim is to spread positivity across the United States. Ten students recently gathered in a classroom for their weekly meeting.

Travis White started this group last fall — with a bang.

A police officer visited him at his student job in the provost's office, he says. "I was in the middle of writing letters when he walked into my office, and he said, 'What is this about?' and I told him. I said, 'It's my student organization — you know, we write letters to random strangers across the U.S. to spread positivity.' And he goes, 'You know, I kind of thought that it was something like that.' He goes, 'But the person who was on the other end of your letter was about in her 60s, she lived alone, and she was afraid someone was stalking her.' "

Now the group includes a business card with each letter.

Freshman Carly Walter says getting a letter in the mailbox beats seeing a text on a phone screen any day.

"It's like a totally different feeling when you get mail, like, 'Oh, somebody really cares about me' than if you get a text and it's just like, 'Oh, another person texted me,' " she says.

According to a Pew survey, the average college student sends about 2,000 texts every month. It's likely that they don't write even one letter.

Meanwhile, Bruzewski says she writes about 2,000 letters a year. She hopes more people will take the plunge — and at least write one or two. 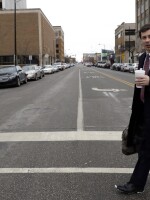 Jennifer Weingart
Jennifer Weingart is a reporter and All Things Considered host. She holds a degree in broadcasting and journalism from Central Michigan University, prior work experience from WCMU in Mt. Pleasant, Mich. and WDET in Detroit. She likes stories that involve passionate people doing awesome things. Her work is heard on WVPE, the Michigan Public Radio Network, Indiana's regional journalism cooperative and a few times on NPR.
See stories by Jennifer Weingart
Latest Stories
Support news that matters in Kansas City
KCUR serves the Kansas City region with breaking news and powerful storytelling.
Your donation helps make non-profit journalism available for everyone.
Donate Now