A federal criminal investigation is focusing on Duke Energy and a North Carolina state environmental agency. A couple of months ago, as you may recall, a storm water pipe ruptured and poured as much as 39,000 tons of potentially toxic carbon byproduct into the Dan River in North Carolina.

JEFF TIBERII, BYLINE: The third-largest coal ash spill in U.S. history has put an uncomfortable spotlight on the governor, a former Duke employee of nearly 30 years, as well as on a state environmental agency, which critics say has failed to properly enforce groundwater regulations. And a debate over environmental clean-up at hundreds of coal ash dumps around the country has been reignited. Beneath the headlines and bureaucracy are the many farmers left wondering whether the river they rely on is safe.

LARRY BURNETT: I've got cattle grazing on the bottoms and drinking water out of the river right now. They have ever since, and they've been doing it all winter.

TIBERII: Larry Burnett has 400 cattle on his farm in Virginia, about 25 miles downstream from the spill site.

BURNETT: My biggest concern would be, first off, is it safe, and will it be safe for the next generation with all of these deposits around.

TIBERII: He says fortunately, the cows seem just fine. The rural landscape along the North Carolina-Virginia border is a collage of windy roads, small churches and farms - cattle, dairy, soybean, wheat and corn. They're here because of the river. So, too, is Duke Energy. When coal ash spilled into the water after a pipe broke, in went arsenic, selenium and other heavy metals. The long-term environmental effects on fish, wildlife, soil and even cows are not yet known.

Will Strader is with North Carolina State University. He works with local farmers on pest, dirt and water issues. His livelihood depends on theirs.

WILL STRADER: The biggest concerns that I had were livestock drinking from the river, irrigation, irrigating with the water having any kinds of contaminants in it, applying it to the land, and also flooding of the river bottoms.

TIBERII: Despite a wet few weeks, no flooding has taken place since the spill. Researchers at NC State are analyzing samples of water and sediment taken from the river. Strader's colleagues want to determine how much water could safely be applied to the land.

STRADER: Hopefully, within the week, we'll have a statement from them on whether or not it's safe, but things are looking very positive right now.

TIBERII: One of those crop farmers patiently awaiting positive news is Jerry Apple. Despite the name, Apple produces corn on about 250 acres of land. He uses the river for irrigation.

JERRY APPLE: If we pump something out there and it got into the land and, you know, it might cause problems a year or two down the road, and that's really kind of what we're kind of worried about.

TIBERII: Apple says if the river is determined to be unsafe, he will switch this summer from corn to soybeans, which require much less water. That would cut his profits by about 25 percent.

As farmers wait, the general feeling seems to be one of optimism. But...

WAYNE FITZPATRICK: Public perception is the great unknown. You know, how is this going to be accepted or not accepted?

TIBERII: Wayne Fitzpatrick is a Virginia dairy farmer and conservationist. He's involved with the Dan River Basin Association, and has concerns about market prices of goods, as well as tourism.

FITZPATRICK: Well upstream of the spill site we've already had anecdotal reminders that people are cancelling their summer cabin reservations and their kayak rentals.

TIBERII: Upstream, there don't appear to be any legitimate environmental concerns because of the spill. Downstream from the spill, the North Carolina Health Department has advised people to avoid contact with the water, for now.

Fitzpatrick says it took just a few hours for a broken pipe and all that coal ash to change the complexion of the Dan River. He expects it will be years before the damage - real and perceived - is fixed. 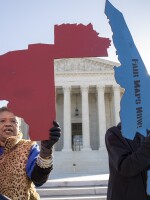