Pamela Peters, 66, was busy Tuesday afternoon helping customers at the “I Love Ferguson” store on South Florissant Road. The little storefront shop is just down the street from the city’s police department where demonstrators gather to protest the grand jury’s decision not to indict Ferguson police officer Darren Wilson who killed 18-year-old Michael Brown on Aug. 9.

Sales of T-shirts and mugs have been brisk at the store, operated by the . The group sells the items to show civic pride and it earmarks the proceeds for businesses that were looted and burned during the protests.

As with most restaurants and businesses in the city, the shop is now tucked behind a plywood cave to protect its windows from vandalism. “I Love Ferguson” signs are glued to the protective shell out front; the street number — 299 — is handwritten above the door.

Peters said she volunteers at the shop to show support for her city and neighbors who are living through a fearful time.

“I am so hurt,’’ Peters said, slowly shaking her head. “I live three blocks over. I smelled the gas bombs and smoke. They’re burning down our town. What are we gonna do? Half our town is almost gone. It’s crazy."

Peters said that she grew up in thePruitt-Igoehousing project in St. Louis, and has lived in Ferguson for 38 years. She wants things to get back to normal.

“We’ve got good people and we’ve got bad people,’’ she said. “There’s a line you have to draw. You need to rethink — do good instead of bad.’’

On Tuesday, customers streamed into the store to buy $8 “I (heart) Ferguson’’ coffee mugs and $10 Christmas tree ornaments. Others came by to donate money for the owners of small businesses that were still smoldering across town on West Florissant Avenue. About a dozen businesses were looted and burned on Monday night.

Brian Fletcher, chairman of the committee, said the store usually sells $500 or $600 worth of merchandise on a “good day.” On Tuesday, he expected to bring in about $7,000, including donations.

The funds are intended to help independent “mom and pop” businesses rebuild, he said.

“We’re concerned about the small businesses that have their immediate livelihood affected by not being in business and losing inventory,’’ he said.

Fletcher, a former Ferguson mayor who is considering running again, said the committee started in August as a way to provide another narrative about the city in the wake of Brown’s death. So far, the group has donated $15,000 to the  Reinvest North County Fund, which will distribute the money. Fletcher estimated another $5,000 and $10,000 contribution will be made in December.

Volunteer Sandy Sansevere, who has lived in Ferguson for 27 years, said that residents responded to Monday night’s violence and destruction by helping one another. They got out their brooms and cleaned up broken glass from the street and were helping businesses board up windows.

“Today, everybody has been so generous, so giving,’’ she said, gesturing out the shop’s door, which held the only bit of glass not covered by wood.

A number of social media campaigns are also under way to assist Ferguson businesses, including a gofundme.com effort for Natalie’s Cakes and More that had more than $100, 000 in pledges within 24 hours. NatalieDuboseopened the bakery on SouthFlorissantRoad last summer. Windows were broken and the bakery damaged during protests Monday night. 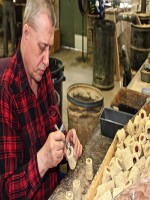 Mary Delach Leonard
Mary Delach Leonard is a veteran journalist who joined the St. Louis Beacon staff in April 2008 after a 17-year career at the St. Louis Post-Dispatch, where she was a reporter and an editor in the features section. Her work has been cited for awards by the Missouri Associated Press Managing Editors, the Missouri Press Association and the Illinois Press Association. In 2010, the Bar Association of Metropolitan St. Louis honored her with a Spirit of Justice Award in recognition of her work on the housing crisis. Leonard began her newspaper career at the Belleville News-Democrat after earning a degree in mass communications from Southern Illinois University-Edwardsville, where she now serves as an adjunct faculty member. She is partial to pomeranians and Cardinals.
See stories by Mary Delach Leonard
Overlooked
A new podcast from KCUR investigating Roger Golubski and corruption in the Kansas City, Kansas, police department.
Subscribe now
Latest Stories
Support news that matters in Kansas City
KCUR serves the Kansas City region with breaking news and powerful storytelling.
Your donation helps make nonprofit journalism available for everyone.
Donate Now