Dartmouth College Adds A Robot To Its Practice Football Team

Football is such a tough sport that some players will be injured before this season even formally begins. You have to practice, the practice has to be realistic, and so people get hurt. Dartmouth is one of the few colleges that does not allow tackling during football practice, unless - unless the target happens to be a robot. And that's our story this morning. Charlotte Albright from Vermont Public Radio checked it out from the 50-yard line.

UNIDENTIFIED MAN #1: All right I need a ball, give me a ball, please.

CHARLOTTE ALBRIGHT, BYLINE: On a sweltering afternoon, head football coach Buddy Teevens is putting three players through their paces. Two are human beings, the third is a robot named MVP for Mobile Virtual Player. Right now, as a prototype, MVP looks a little like a green wedge-shaped punching bag. From a distance, it mimics a human torso. And even without a head, arms or legs, it can be surprisingly hard to capture when it starts darting around the field.

Bam - tackled. But MVP wobbles right back up and waits for further instructions from a guy wielding a remote control on the sidelines.

ALBRIGHT: MVP's operator is Elliott Kastner, a grad student at Dartmouth's Thayer School of Engineering. Playing football as an undergrad, Kastner saw friends get injured, so his design team wanted to build a mobile robot that can take a hit without going to the hospital. Sometimes, Kastner says, MVP's act like quarterbacks, other times, wide receivers.

ELLIOTT KASTNER: Having two of them side-by-side running down the field can simulate receivers running two different routes such that a defensive back has to react after a ball is thrown, but can finish the complete tackle - something they've never been able to do at practice when there's no contact.

ALBRIGHT: Coach Teevens can ask this robot to take risks he never expects of human players. He says human injuries have dropped 80 percent since he banned tackling at practice five years ago.

BUDDY TEEVENS: Concussive injury rate is down. Again, just because we don't hit each other. Adding this component to practice drops the likelihood of an injury, really, by 50 percent, because we've removed one person from the equation.

ALBRIGHT: And the other half of that equation, Dartmouth linebacker Will McNamara loves giving his robotic teammate all he's got.

WILL MCNAMARA: It feels great. You know, it gives us the opportunity to go out and take our anger out on someone else other than ourselves, right?

ALBRIGHT: MVP has broken a few wires in the first three weeks of practice, but after overnight repairs, it shows up for more punishment, right on time, ready for action. Over the next year, its designers hope to upgrade and sell it to other schools and perhaps professional teams. Maybe they'll even give it a head, which they hope will be virtually concussion-proof. For NPR News, I'm Charlotte Albright in Hanover, NH. Transcript provided by NPR, Copyright NPR. 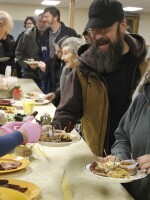 Charlotte Albright
Charlotte Albright lives in Lyndonville and currently works in the Office of Communication at Dartmouth College. She was a VPR reporter from 2012 - 2015, covering the Upper Valley and the Northeast Kingdom. Prior to that she freelanced for VPR for several years.
See stories by Charlotte Albright
Latest Stories
Support news that matters in Kansas City
KCUR serves the Kansas City region with breaking news and powerful storytelling.
Your donation helps make non-profit journalism available for everyone.
Donate Now