Small town doesn't quite describe Bethune, Colo. It spans just 0.2 square miles and has a population of 237. There's a post office, but it's open only part time. There's not a single restaurant, and the closest big store is in Kansas.

That didn't stop Ailyn Marfil from moving to Bethune a couple of months ago. In fact, she thinks it's a pretty exciting place to live. "I was looking for speed and action, and so Bethune gave me speed and action. More than I expected," she says.

That's speed and action she didn't get from her last job. Marfil is from the Philippines, but came to Colorado via Japan, where she taught English language. There, she had a lot of what she calls "lazy time." The way English is taught, she says, you could spend an entire week on, "Hello, what is your name?" In Bethune, Marfil teaches English literature, juggling seven classes a day.

Marfil moved across the world to work in Colorado because Bethune, like many cities across the U.S., is struggling to find teachers.

Superintendent and principal Shila Adolf says she used to get American applications for at least elementary teacher positions, but "now we just don't get applications, period."

So a few years ago she turned to foreign teachers. The immigration paperwork can be intense, but Adolf says she understands it's to ensure that a U.S. resident isn't losing out on a job. Bethune isn't the only town doing this. The federal government approved nearly 3,000 visas for foreign teachers in 2014.

There are challenges, like helping students get used to a teacher's accent. For Adolf, though, it has been a positive experience. "It seems like all of the teachers that I have hired from out of the country have a high level of perseverance," she describes. "They have either come from scenarios or situations that they don't want for their own families, or they've taught somewhere where they felt they weren't valued or appreciated."

Generally, rural teacher salaries are low. Bethune starts at $30,000 a year. Raymond Cabahug, another new hire from the Philippines, says, "I wouldn't be able to give my family a better life if I had been teaching in the Philippines."

In the classroom, he's patient with his students as they stumble over math equations. He tried teaching in Baltimore when he first came to the U.S., but says the classroom was chaotic there, "and I said there might be some place here in America where I can really feel like I am a teacher." Cabahug applied to Bethune, and "I found it. It was here!"

A similar feeling brought Jose Rivera-Acosta to Bethune from the U.S. territory of Puerto Rico. "Here, it's small," Rivera-Acosta says about Bethune. "It's a different environment. It's more close, one-to-one." He taught for decades in the capital city of San Juan, but says he enjoys teaching in Bethune in ways he never could back home. "You can follow the student," he says. "You can watch how they improve, how they progress through the years."

These teachers say working in a small town was a hard adjustment at first. Bethune is tight-knit. But Rivera-Acosta talks about how doing volunteer work in nearby Burlington, then grabbing dinner at the McDonald's there, has helped him fit in. Servers there know him by name and hand him his coffee and two creams, before he even orders.

During a quick lunch break, these three teachers joke about the perfect job announcement for teaching in Bethune:

Ailyn Marfil: "Do you want to mold minds and touch hearts? Be a Bethune teacher."

Jose Rivera-Acosta: "We are not just a community, we are a family." 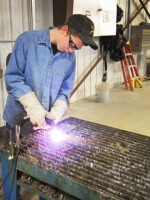