Philly Planner: With Climate Change The Past Doesn't Predict The Future

This week, ministers from 190 nations are in Paris working on a treaty intended to cut carbon dioxide emissions. It's a gathering aimed at staving off the worst impacts of climate change. One of these is sea level rise. Predictions of how high and how soon oceans will rise keep changing. From member station WHYY in Philadelphia, Susan Phillips reports on the dilemma faced by planners and local officials responsible for protecting their cities from rising tides.

SUSAN PHILLIPS, BYLINE: The guy everyone told me to talk to works with the city's water department. His name is Chris Crockett, and I met him on the banks of the Delaware River in Philadelphia.

CHRIS CROCKETT: We're just about to walk underneath the Ben Franklin Bridge, and you'll see the subway train going across...

PHILLIPS: It's Crockett's job to help prepare the city for rising sea levels. And while Philadelphia's in a better position to face the dangers of future flooding linked to climate change than, say, New York or Boston, the city does sit along a tidal river, the Delaware. And the tide here in this river rises and falls 6 to 7 feet two times a day.

CROCKETT: Because it's just like a big bathtub sloshing back and forth, and so we want to make sure that salt line doesn't come up to the city's water supply intakes.

PHILLIPS: Crockett is an engineer, so when he's faced with a challenge, like deciding how to maintain a centuries-old water system, he thinks like an engineer and wants to proceed logically.

CROCKETT: One of the fun things in engineering is we would always teach this concept of stationarity, which is you go back and look at the historical record. And you say OK, this was the 100-year storm. This was the 50-year storm. That sets your design criteria for how you'd design a road, a highway, a bridge, a pipe.

PHILLIPS: And this is where Crockett's job is getting a lot more difficult. While planning for new systems, Crockett can't simply depend anymore on looking to the past as his guide to the future. Five years ago, the Army Corps of Engineers predicted 3 feet of sea level rise by 2100. But today, some are predicting a 2-foot rise as soon as 2050.

CROCKETT: Because you really want to know - how high can it go? When is it going to stop? Should we just plan for everything melting?

PHILLIPS: Will the seas rise 2 feet by 2050 or even higher? Crockett wants to know.

CROCKETT: So we can actually stand here and say OK, it's going to be 4 feet, 5 feet. Let's draw some lines. Let's stand here and look at it and see what it means. And how would we have to change how we design, build or even maybe operate some of the parts of the city?

PHILLIPS: And so here's Crockett's hope - he wants the bureaucrats who are meeting in Paris to give him the certainty he needs as an engineer to plan future construction and allow him to make the city more resilient to higher tides.

CROCKETT: When you suddenly say that the past doesn't predict the future and - now you're left with almost acting like a stockbroker, and you're really - climate change kind of goes from a standard, scientific approach to almost acting like a Wall Street broker in predicting what the stocks are going to do. 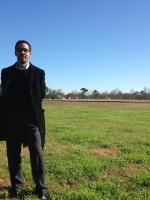 Susan Phillips
Susan Phillips tells stories about the consequences of political decisions on people's every day lives. She has worked as a reporter for WHYY since 2004. Susan's coverage of the 2008 Presidential election resulted in a story on the front page of the New York Times. In 2010 she traveled to Haiti to cover the earthquake. That same year she produced an award-winning series on Pennsylvania's natural gas rush called "The Shale Game." Along with her reporting partner Scott Detrow, she won the 2013 Alfred I. duPont-Columbia University Journalism Award for her work covering natural gas drilling in Pennsylvania. She has also won several Edward R. Murrow awards for her work with StateImpact. She recently returned from a year as at MIT as a Knight Science Journalism Fellow. A graduate of Columbia School of Journalism, she earned her Bachelor's degree in International Relations from George Washington University.
See stories by Susan Phillips
Latest Stories
Support news that matters in Kansas City
KCUR serves the Kansas City region with breaking news and powerful storytelling.
Your donation helps make non-profit journalism available for everyone.
Donate Now