Older women are my heroes. I'm envious of their knowledge — the beautiful, rich kind of knowing that only unfurls with time, patience and experience.

For example, here is a thing that NPR legal affairs correspondent Nina Totenberg knows: how to explain the complexities of the U.S. legal system in an engaging, thoughtful way. When some people think of the Supreme Court, they hear Nina's voice in their head.

Last year, I helped her do a Reddit AMA and answer questions from strangers. When someone asked if she had to practice her "NPR voice," she replied straightforwardly: "My voice is my voice, period." Period.

This is what I admire: the know-how and conviction that comes with age. After the chat, we took a photo, but not before she taught me how to apply lipstick without a mirror. A true veteran knows how to put on makeup.

Increasingly, we're finding more ways to celebrate women older than 50. The NPR gift shop sells the "Nina Totin' Bag," her face prominently featured in Andy Warhol-style color blocks. In October, I couldn't stop googling "Ruth Bader Ginsburg Halloween costumes" (the best photos, if you're curious, are of the baby justices). When I browse Etsy, I'm amazed to see handmade earrings emblazoned with the faces of the Golden Girls, the ultimate girl gang in the pre-Swift era. Last month, as part of NPR's Changing Lives of Women series, we encouraged listeners to celebrate older women with the hashtag #GrownLadyCrush.

My mom juggled marriage, mommyhood, a career and community service. I can barely get to work. #grownladycrush #wcw pic.twitter.com/HfNN3nlxXG

The Internet helps us share the stories of brilliant older women and memorialize them in GIFs and memes. It also makes it easier, as MSNBC journalist Irin Carmon told me, to "choose our own heroes." She is the co-author of Notorious RBG: The Life and Times of Ruth Bader Ginsburg, a book that heroizes the 82-year-old Supreme Court justice. Carmon believes young women are now finding role models in older women who were rendered invisible in the pre-Web era.

When I think about aging, I often return to a popular set of GIFs made from a documentary of the late actress and singer Eartha Kitt. She's in her 50s, sipping from a silver cup at a table amid lush greenery. Offscreen, a male interviewer asks, "If a man came into your life, wouldn't you want to compromise?" She raises her eyebrows, then suddenly, as if struck by something, cocks her head back and lets out a wicked, wide-mouthed laugh. "Stupid," she guffaws, this time the laugh bigger, more whole. Then she spouts a delicious meditation on self-love: "I fall in love with myself, and I want someone to share it with me. I want someone to share me, with me."

Seeing women live like Eartha makes it less scary to think about getting older. Eartha didn't compromise, and neither should we.

"Growing up, I would watch movies or read magazines and there was always something that seemed really sad about the older woman. ... I love that we're changing that, because it's complete garbage," says Aminatou Sow, host of Call Your Girlfriend, a popular podcast that often touches on feminist topics. She is also the co-creator of the "You Can't Spell Truth Without Ruth" meme (she and a friend made stickers of the slogan and Ginsburg's face, then handed them out around Washington, D.C.). "I love watching a lot of those women reclaim their bodies and their experiences and just completely give no mind to what anybody thinks of them."

Being an old woman used to mean losing everything: independence, sexuality and visibility. A lot of that is still true, but now there's a bit of glamour to aging. Think of writer Joan Didion, in all black and sunglasses in a recent Celine ad, the eclectic and colorfully adorned 94-year-old fashionista Iris Apfel, or Instagram's favorite trendy grandma, " Baddie Winkle" (her account biography: "Stealing your man since 1928").

While there's no "silver fox" equivalent for old ladies, there is a new terminology, adopted from TV shows such as Broad City and Internet slang: the " badass" old lady, the "queen" or the "gangster." Our grandmas aren't just doddering "grannies" anymore — we recognize the power of their age. They are world leaders (see: the Tumblr and Michelle Obama appreciation tweets), kickass, multidimensional fictional characters (Lily Tomlin in the film Grandma) and real-world superstars (hello, Grace Jones).

In a recent Fresh Airinterview with feminist activist Gloria Steinem, host Terry Gross played an audio clip of her 1992 interview with Steinem. Steinem was in her late 50s at the time, and said she looked at aging with fear: "It was like falling off a cliff, because I couldn't see enough people ahead of me," she told Gross at the time. "I have very few role models of women my age who are doing what I'm doing," she said in the most recent interview.

Today young women can look to a great many accomplished older women for guidance. Thanks to Steinem, 29-year-old Shelby Knox knew she could turn a love of feminist organizing into a full-time job. At age 20, Knox was invited to live with Steinem in her New York apartment. (It was part of a scholarship program, and Knox happened to be the only applicant willing to take care of Steinem's geriatric animals).

Knox knew she loved feminism, writing and speaking but wasn't sure if she could make a living from those interests. Then she met Steinem. "She calls herself an itinerant feminist organizer, and I adopted that identity for myself," Knox says. "When Gloria opened my eyes to that possibility ... it gave me a very definite purpose." Knox predicts she could continue working well into her 80s.

Freelance writer and illustrator Annie Mok worries about not getting work when she's older. As a trans woman, she is also concerned about the isolation of old age and discrimination in nursing homes. Not to mention the dozens of trans women, especially trans women of color, who are killed every year before they even turn 50. Without downplaying those very real issues, Mok says there is a part of aging that she looks forward to: what she calls "settling into herself."

"I like the idea that as I continued to get older, I would continue to make peace with myself and dig out what's really me," she says.

Cutting out the crap, in other words, or not letting whatever "it" is —transphobia, sexism, racism — dictate your life.

Shortly after the death of Nora Ephron, Lena Dunham wrote of her admiration for Ephron (the two were friends, despite the more than 40-year age difference) and her no-nonsense personality:

"She called b******* on a whole host of things ... donuts served in fancy restaurants; photo shoots in which female directors are asked to all stand in a cluster wearing mustaches; the idea that one's writing isn't fiction if it borrows from one's life."

Older women can smell BS from a mile away.

Or, in the words of 26-year-old The Daily Show correspondent Jessica Williams, who talked about her "girl crushes" in the latest issue of the magazine :

"We think that we always know what we're talking about. And you know how every five years you're like, 'That thing I did five years ago was dumb'? Old ladies have done that a million times. ... They've had their kids or they've chosen not to, they don't have their periods anymore, which is dope. They've been with their husbands for a really long time or they're dead, and they're like, 'Whatever, it is what it is.' And I'm like, damn, you're my hero."

They are heroes because they have cleared paths for all kinds of women to live freely: Trans woman activist Miss Major fought for transgender rights at the Stonewall riots, and Totenberg was one of the first women to chase down justices for a scoop. They deserve to be celebrated in media, on T-shirts and, in Justice Ginsburg's case, even on our bodies (yes, there are RBG tattoos).

"One of the things people react to with Justice Ginsburg is this DGAF moment," Carmon says. "DGAF," or Don't Give a — well, you fill in the rest.

If being an older woman means caring less about the small things and living life on your own terms, then I can't wait. 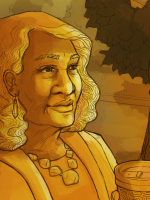