All across the television landscape, viewers are changing how they watch TV. Instead of taking in episodes of hit shows like "The Big Bang Theory" once a week, people are stockpiling episodes to watch them later. Today, we look at one consequence of binge watching that may affect the economics of creating new shows. NPR's social science correspondent Shankar Vedantam spoke with Steve Inskeep about this new research.

INSKEEP: How would you test this, exactly?

VEDANTAM: Well, Wendy Moe at the University of Maryland and David Schweidel at Emory University, Steve, they analyzed television binge watchers. It's actually difficult to measure whether when you're watching television you're paying attention to the ads or not. So what Moe and Schweidel did was they analyzed television binge watching on the Hulu platform. People are watching television on a computer. There are ads that show up. And they attract about 10,000 viewers - 100,000 viewing sessions. And the researchers analyzed how willing people were to engage with the ads. Here's Moe.

WENDY MOE: So the binge watchers don't respond to advertising nearly as much as the people who are just casual viewers. And we find that non-binge viewers are more likely to actually engage in click-through on the ads, whereas the binge viewers have a much lower response rate.

INSKEEP: OK, so unlike ads on traditional TV, somebody's going to take an action that can be measured. They're going to click on that pop-up, whatever it might be.

VEDANTAM: That's exactly right. Now, of course, the same thing could also be happening when people are watching television, it's just much more difficult to measure.

INSKEEP: OK, so if people are measurably paying less attention to the ads when they binge watch, does that undermine the advertising that ultimately pays for the TV show?

VEDANTAM: That's exactly what Moe and Schweidel are suggesting. I mean, we know from both anecdotal experience and had data, Steve, that more and more people are binge watching. There are many platforms that depend on advertising revenue. If Moe's theory is right, shows on platform such as Netflix or HBO might be better off because they're less dependent on advertising. You pay a monthly subscription fee to access those services.

INSKEEP: OK, so Shankar, let's just remind people you come here to talk with us about the human brain. So I want to find out what this tells us about the brain - that there's something about watching one episode after another of the same show that would make me less interested in clicking through on an ad and being distracted by that.

VEDANTAM: Moe and Schweidel think that when you binge watch a show, you get sucked into the world of that show. And part of the reason you binge watch is that you want to stay in that fictional world. When you pop an advertisement into the show, it's a reminder to the viewer of his or her real world that asks the viewer to disengage with the fantasy world and reenter the real world. Binge watchers don't want to reenter the real world. That's part of the reason they're binge watching. Here's Moe.

INSKEEP: This is especially interesting because often it's the advertising that is encouraging you to fantasize how your life would be different with that new car or that new bit of jewelry. And you're saying, actually, it's the ad that drags you down.

VEDANTAM: Well, in some ways I think they are both different fantasy worlds. The question is the viewer might just want to stay in one of them and not want to engage with the other. There are several potential implications here, Steve. One is that platforms that are more advertising-based might actually want to dissuade people from binge watching. So when you reach the end of one episode, maybe you actually want to slow people down and say, come back after two hours and watch the next episode. It's also the case that advertisers might get really clever and integrate advertising into the content of the show. So rather than break "The Big Bang Theory" for the McDonald's ad, you have characters in "The Big Bang Theory" go to McDonald's.

INSKEEP: Shankar, let me just grab a drink of this Coca-Cola here, if you don't mind...

INSKEEP: ...Or Pepsi. That's Shankar Vedantam. He joins us regularly to talk about social science research. He also explores the science of marketing and many other ideas on his new podcast, Hidden Brain. 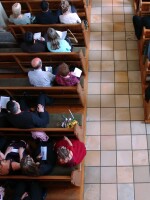