At Least 4 Dead, Including Gunman, At Kansas Manufacturing Plant

Four people are dead, including the shooter, and at least 14 are injured after an employee opened fire at a manufacturing plant in Hesston, Kan., according to Harvey County Sheriff T. Walton.

The suspected shooter was killed inside the plant by the first officer at the scene, Walton said at a press conference late Thursday .

"Even though he took fire, he went inside of this place, and saved multiple, multiple lives," he said.

Officers responded to the first calls around 5 p.m. CT after shootings in nearby Newton, Kan. Walton said the gunman then ran his car off the road, shot another person and stole their car.

He then drove to Excel Industries, the turf care products manufacturer where he worked, Walton said, and entered the building with an assault-style rifle and a handgun. At least 150 people were in the plant at the time for the second shift of the day.

The sheriff said the shootings appeared to be random, and that authorities believed they had a lead on the gunman's motive.

"Not terrorism," he said. "There were some things that triggered this particular individual."

A half-dozen city, county, state and national agencies responded to the shootings, Walton said, and two helicopters and 15 ambulances were used to evacuate victims, several of whom remain in critical condition.

Others in the plant at the time were reunited with their loved ones at a nearby high school, where authorities also planned to conduct about 200 interviews, and where counseling was also being provided.

"Everybody says it can't happen here, but it's all those places that it happens at," Walton said. "This is a fairly peaceful community, and to have something like this is tragic." 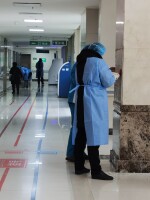