As Christie Stands By Trump, New Jersey Supporters Wonder Why

As Donald Trump delivered his Super Tuesday victory speech to reporters, his most prominent endorser, New Jersey Gov. Chris Christie, stood stony-faced behind him, prompting a deluge of tweets comparing the former presidential candidate to a hostage.

After Christie refused to take questions about Trump at a news conference at the statehouse in Trenton on Monday, six New Jersey newspapers from the Gannett company penned a joint editorial saying Christie should be recalled for ignoring the people of the state. And a poll released Wednesday showed that his job approval in the state stood at 27 percent, an all-time low, following the endorsement.

One of his critics' chief complaints is that Christie developed his political brand around extending the Republican Party's tent to the marginalized in New Jersey — particularly Hispanics and Muslims — and that those gains may be lost now that Christie has endorsed a candidate whose remarks are viewed by many as offensive.

Joining the chorus were former New Jersey Gov. Christie Todd Whitman (" I am ashamed that Christie would endorse anyone who has employed the kind of hate mongering and racism that Trump has"), Jennifer Rubin, a conservative blogger who has been a stalwart Christie booster (" Chris Christie, you're nothing to me now") and one of his top fundraisers, Bobbie Kilberg (" I don't get it").

The endorsement has put Christie on the defensive. In a Sunday interview on ABC's This Week with George Stephanopoulos, Christie ended up getting blindsided by Stephanopoulos, who forced the governor to account for how he had previously criticized Trump on all of his most significant policy positions. In one particularly difficult exchange, Christie refused to say he disagreed with Trump's ban on Muslims — even though as a candidate, he had brought this up as an indication that Trump wasn't fit to serve as president.

"I'm saying that's only one piece of an overall approach to national security," Christie said.

Christie also found himself deflecting questions about whether Trump's proposal to build a wall on the Mexican border was racist, even though he himself had made fun of the wall at almost every campaign town hall he held.

Eventually, Christie just blamed the media for being too tough on Trump.

New Jersey Republicans in the state privately expressed concern that Trump's presence at the top of the Republican ticket in November could hurt them in local races, while Muslim leaders publicly repudiated the comments from a governor who had been seen as a vocal defender of their rights.

Current and former supporters of Christie believe he made a savvy political move out of crass self-interest — he wanted to pick an early winner in the race for the Republican nomination so he can maintain a prominent role as a Trump surrogate and potentially land a job in the Trump administration.

Back in New Jersey, county GOP leaders were taken aback because they were supposed to meet with Christie this week, when they expected to talk about possible endorsements. They were also starting to coalesce around Florida Sen. Marco Rubio, whom Christie disdains.

Whether New Jersey Republicans likewise support Trump will be seen as a critical test of loyalty to the governor in a state that even members of Team Christie feel he is too eager to leave behind.

Asked by The New York Times if Christie's "inclusive-minded" reputation as a Republican was now at risk, Ray Washburne, Christie's finance chairman for his presidential campaign, said: "That's sure what a lot of people think. I'm still shocked and dismayed."

You can hear more analysis about Christie's endorsement on the WNYC podcast, "The Christie Tracker." 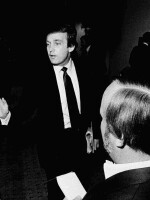