Governor Mike Pence is back in Indiana this evening. He returned to his state for a rally, his first as Donald Trump's running mate. The presumptive Republican nominee made his first public appearance with Pence today in Manhattan. It was one of the biggest moments of Trump's campaign and the culmination of a rocky rollout. NPR's Sarah McCammon has more from New York.

SARAH MCCAMMON, BYLINE: This week, Donald Trump has seemed a bit like a jittery groom. He quickly put off his big announcement in the wake of the deadly attacks in Nice, France, prompting speculation that he was getting cold feet. But this morning, Trump made it official.

DONALD TRUMP: So I'm here today to introduce the man who will be my partner in this campaign and the White House to fix our rigged system.

MCCAMMON: Trump stood alone behind the podium at a Hilton Hotel in Midtown Manhattan. He suggested he'd chosen Pence because of his reputation as a social conservative on issues like same-sex marriage and abortion.

TRUMP: And one of the reasons is party unity, I have to be honest. So many people have said party unity.

MCCAMMON: Nominating Pence, a governor with experience in Congress, could also help Trump with the party's establishment, who frequently urged him to watch his tone. But even in this speech, the real estate developer displayed his tendency to follow no script but his own, often drifting from his prepared remarks as he praised his running mate's economic record.

TRUMP: Besides that, Bobby Knight, my friend who really did help me - I mean, if you want to reference Bobby Knight in Indiana, we love Bobby Knight. But he agrees with everything I'm saying. He loves the governor.

MCCAMMON: Trump brought up a hotel his companies are developing in Washington, D.C., as an example of his ability to oversee projects.

TRUMP: It's amazing, probably the best location, one of the most sought after projects in the history of the GSA, general services.

MCCAMMON: Finally, about half an hour in, Trump came back around to the issue at hand. He forgave Pence's primary endorsement of Texas Senator Ted Cruz, dismissing it not as disloyalty, but a reluctant capitulation to the establishment. Trump called it the single greatest non-endorsement I've ever had.

TRUMP: With that, I would like to introduce a man who I truly believe will be outstanding in every way and will be the next vice president of the United States, Governor Mike Pence.

MCCAMMON: Pence, for his part, was careful not to outshine the presumptive nominee. He gave a disciplined speech talking about spending time with the Trump family and vouching for Trump's character.

MIKE PENCE: Donald Trump is a good man, and he will make a great president of the United States of America.

MCCAMMON: Trump has been seen as friendlier with others on his VP short list, like former House Speaker Newt Gingrich and New Jersey Governor Chris Christie. His campaign has denied news reports that Trump was up late into the night Thursday asking aides if there was time to change his mind.

Trump and Pence may not be soul mates, but they could form a marriage of convenience. Pence brings a calmer temperament and popularity with the base that Trump may need in a tough election fight. Using language from the Bible, Pence suggested Trump had made up his mind days ago, and he said, yes.

PENCE: And when I got this call last Wednesday, I could only think of that ancient question - who am I, oh Lord? And who is my family that you have brought us this far?

MCCAMMON: Whatever Pence was hearing on Wednesday, Trump said publicly Thursday night that he had not made a final, final decision. It seems by today, he'd gotten over any doubts and decided to tie the knot. Sarah McCammon, NPR News, New York. Transcript provided by NPR, Copyright NPR. 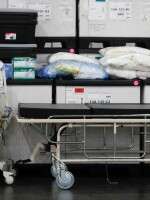