A rare photo is going to be on exhibit at the new National Museum of African American History and Culture in Washington, D.C. It's a black-and-white image of young girls behind bars. The picture tells one of the untold stories of the 1960s civil rights movement. Bradley George of Georgia Public Broadcasting has that story.

UNIDENTIFIED MAN: The city of Leesburg moved out of it, and they've been cleaning it out.

EMMARENE STREETER: OK, can we go in?

GEORGE: Emmarene Streeter turns the handle and walks into the place where she was once imprisoned.

STREETER: This is my first time back down here.

GEORGE: Her first time in 53 years, even though she's lived in the area her whole life.

She walks away, wiping a tear from her eye. She was jailed here in the summer of 1963. Streeter was 14. She was swept up in civil rights protests. She joined more than 200 activists in a march on a police station in the town of Americus. They knelt and prayed in front of the building, and then the police chief came out.

STREETER: Chief Chambliss came out and asked us to disperse, and we did not. So they herded us, like cattle, through the police station and had a waiting transfer truck, a 16-wheeler, waiting for us at the back of the jail.

GEORGE: Shirley Reese was also jailed that summer. She was 14 years old. She was with another group attempting to buy tickets at the whites-only entrance of a movie theater.

SHIRLEY REESE: So in about maybe 30 minutes, here come a truck, a big truck, pulling up to the Martin Theater and said that everyone in this line is arrested. And you can imagine what I was thinking about then. I had snuck away from home. My mama didn't know where I was because they was not home, and here I am being arrested.

GEORGE: Fifteen girls spent the night in a nearby jail. Carol Barner-Seay, then 12 years old, thought they would head back to Americus the next day.

CAROL BARNER-SEAY: Parents knew that we was in Dawson, but now you're moving us from Dawson. Nobody know where we are. We didn't even know where we were at the beginning.

GEORGE: Turns out, the girls were moved further away to the stockade in Leesburg. They spent the next two months sleeping on a cement floor.

GEORGE: It was a local dog catcher who brought the girls food every day and also sent word to their parents. A young photographer involved in the civil rights movement also found out about the girls. Danny Lyon drove to Leesburg, and with the help of a local activist, distracted the guard and snuck up to the stockade.

DANNY LYON: I remember reaching through the bars 'cause the glass was broken and shaking hands. And we'd say things like freedom, and we were touching each other. And I said, listen, I cannot take pictures with you all crowded around like this.

REESE: I guess we got a little loud. And I guess I was saying, while I was smiling, who are you?

LYON: One of the first persons I photographed was Dr. Reese 'cause this beautiful young girl - I think she was 13 or 14 - grinning right close to the glass.

GEORGE: Lyon's images show a broken toilet and dripping shower head and girls smiling for the camera, others looking surprised. When the pictures were published, the publicity led to the girls' release. They were let go on a Friday.

STREETER: We went to school that Monday morning. They expected us there, and we were there.

STREETER: We didn't even have the chance to go to town to buy new clothes or anything.

GEORGE: They were never charged, and their parents had to pay a $2-a-night boarding fee. Diane Dorsey-Bowens says they could never really talk about what happened.

DIANE DORSEY-BOWENS: Everybody just shut down. And my mom would just cry, cry, cry. She was so worried about me, and she would try to talk and everything. She would say - ask me something, I'd just run out of the house. In fact, I'd go get under the house.

GEORGE: One of Lyon's photographs will be in an exhibit at the Smithsonian's National Museum of African American History and Culture. Rhea Combs is the museum's photography curator.

RHEA COMBS: They have basically the fortitude and strength of, you know, a thousand men.

STREETER: I just can't even imagine staying in there for 45 days.

GEORGE: That's Emmarene Streeter, back for the first time. Carol Barner-Seay has returned often over the years.

BARNER-SEAY: I'm just grateful to be able to keep coming back to see where I was. Even though it held me then, it don't hold me now. So when I left, I didn't take this with me. 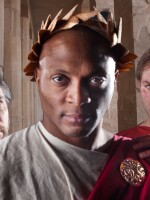