We now head to Maine where voters are considering a big change to their election process. A ballot initiative asked people in Maine to adopt a system in which they elect officials by ranking them in order of preference instead of choosing just one. It would apply to members of Congress, governors and state legislators. Maine would be the first state to do this. Steve Mistler from Maine Public Radio reports on how supporters of the measure are trying to get people used to the idea.

STEVE MISTLER, BYLINE: Here at Mast Landing Brewery in Westbrook, people are tasting four beers and ranking them in order of preference.

MISTLER: If no beer wins a majority of votes after the first count, the least popular is kicked out, and its votes are redistributed to the other beers. This continues until one of the beers ends up with a majority.

UNIDENTIFIED WOMAN: And the Gunner's Daughter.

MISTLER: Gunner's Daughter is the dark horse, the long shot. It's a stout made with peanut butter. It draws a mixed reaction. After a couple of sips, this man is still undecided.

UNIDENTIFIED MAN: I had a PB&J for lunch, so I'm a peanut butter guy.

MISTLER: But Gunner's Daughter has a chance, and Kyle Bailey says it won't be the spoiler.

MISTLER: Bailey leads the ranked choice voting campaign. He says the system gives voters more choice, more voice. No more strategic voting, he says. That is, casting votes simply to ensure the candidate you like the least doesn't get elected. Supporters of ranked choice are making some other big promises. No more scorched earth campaigns. Politicians can't just appeal to the activist base of their parties because each candidate has a chance to be ranked by voters. Advocates also say that means more chances for centrist candidates and fewer extremists. But Gordon Weil says ranked choice voting is flawed.

GORDON WEIL: Ranked choice voting is not democratic. It's not necessary. It's not constitutional, and it's not usual.

MISTLER: Weil as a former aide to presidential candidate George McGovern. He says advocates for ranked choice are pushing a change that will make Maine elections more computerized, less transparent and more susceptible to hacking. Weil also says the idea that changing voting systems will magically engineer kinder, gentler elections fails to take account for our increasingly stratified, self-sorted society and our politics.

WEIL: Our problem is we can't find out how to compromise. And that's done by people, not by voting machines.

MISTLER: Weil also worries the change is motivated too much by dislike of Maine Governor Paul LePage, a divisive Republican who was twice elected by a plurality, not a majority, in contest with more than two candidates. The ranked choice campaign is focusing less on procedure and more on its promise. Back at the brewery, Faye Lakeman and her husband Dan say they're disillusioned with polarized politics.

FAYE LAKEMAN: I think we do have extremes prevailing, and I think that's why a lot of us are interested in the ranked choice system.

MISTLER: Faye and Dan are also interested in the Gunner's Daughter, the peanut butter stout. The dark horse candidate makes it all the way to the final round of voting. After the final tally, Gunner's Daughter loses to a well-rounded beer, hoppy but not too bitter. For NPR News, I'm Steve Mistler in Portland, Maine. Transcript provided by NPR, Copyright NPR. 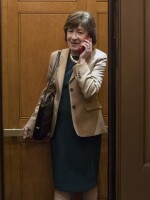