We turn now to Somalia, which has been without an effective government for nearly a quarter-century. But this past week the parliament managed to pull off a presidential election just after President Donald Trump temporarily barred immigration from Somalia and six other Muslim-majority countries to the United States. Though U.S. courts have since suspended the ban, the future of Somalia is still uncertain.

NPR's Eyder Peralta is covering the story. He joins us now from his base in Nairobi, Kenya. Eyder, hello.

SINGH: Somalia's often described as lawless, much of the country overrun by al-Shabab Islamist militants. But the recent presidential election in Somalia was a big deal, right?

PERALTA: Yeah, no, it was, specifically because this election included many more Somalis than ever before. And this was really the final piece toward a process of creating a functional central government. And that hasn't happened in Somalia in more than two decades. And the last piece of that is that a popular candidate won. His name is Mohamed Mohamed Farmajo. He uses a nickname as a last name because he liked cheese as a kid, and formaggio means cheese in Italian. But that's another story, Lakshmi (laughter).

SINGH: OK, I won't ask. So let's find out more about this person. Why's he considered such a rarity?

PERALTA: So Farmajo's a dual Somalian and American citizen, and he spent much of his life in Buffalo, N.Y., working for the local government there. But he's popular, and the polls showed that he was the country's favorite. And that's a big deal here, that parliament elected the popular favorite and the man seen as the least corrupt candidate.

Of course, he has a really tall task ahead of him. First of all, he has to deal with al-Shabab. And then he has to deal with a drought. It's getting really bad here in the Horn of Africa. The U.N. estimates that 2.9 million people are at the risk of famine. And the biggest thing that Farmajo has to do is build a central government, which has hardly worked since 1991.

And one thing that we should keep in mind here is that al-Shabab has remained quiet about this election. We don't know what that means. But in the past, they've been very quick to declare war.

SINGH: How did Somalia manage to pull this historic election off given all of the problems it had encountered so many other times?

PERALTA: So it was not easy at all. As we got closer to the vote I spoke to Somalis both in the country and in diaspora, and I heard a ton of skepticism. One of the people I spoke to was Mohamed Mubarak. He runs an anti-corruption group called the Marqaati. He was super certain that the incumbent president would win. But then the elections happened and there was a huge surprise. I almost immediately called Mubarak, and this is what he told me.

MOHAMED MUBARAK: The MPs really voted against corruption. It shows you cannot buy the MPs, but the MPs can buy their seats. But when it comes to the presidential election, because the MPs are politicians, they don't look at who gives them how much money. They look at their own interests or the interests of their constituencies.

PERALTA: So what he's saying here is that there's a silver lining in an almost totally corrupt process, and that's that at least the presidency in Somalia cannot be sold to the highest bidder.

SINGH: Farmajo also faces another challenge, and that is what will happen to U.S. assistance given that Somalia was among seven countries to be placed on the Trump administration's list of those nations where immigration to the U.S. was banned. So what are you hearing?

PERALTA: So, I mean, what we know is that Somalia receives a ton of aid from the international community. In fact, this vote was pushed by the international community. What's unclear is what the administration of President Trump will do. And, you know, I was in Dadaab last week, this big camp which is mostly Somali refugees, and there was two big things on their mind.

One was the Kenyan government had insisted that they would close this big Dadaab camp, and then this order by President Trump. And then these two things stopped. A court in Kenya said that Dadaab could not close, and then the 9th Circuit stopped President Trump's executive action. And there was celebration. So they very much welcome these two pieces of news. 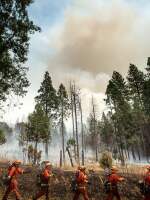 Lakshmi Singh
Lakshmi Singh is a midday newscaster and a guest host for NPR, which she joined in 2000.
See stories by Lakshmi Singh
Latest Stories
Support news that matters in Kansas City
KCUR serves the Kansas City region with breaking news and powerful storytelling.
Your donation helps make non-profit journalism available for everyone.
Donate Now