A team of scientists is tracking how greenhouse gases move through the atmosphere. Not with computer models - they're actually taking measurements as they fly around the globe. Craig LeMoult of WGBH joined them on one flight to the Arctic.

CRAIG LEMOULT, BYLINE: From the outside, this DC-8 looks a lot like any other jet. But inside...

TOM RYERSON: You'd never find all this together anywhere else but this aircraft.

LEMOULT: Tom Ryerson of the National Oceanic and Atmospheric Administration walks down the aisle of this flying laboratory. Most of the seats have been pulled out. Tubes suck the air from the outside and feed sophisticated devices for measuring pollution.

RYERSON: So they're measuring single particles - these are micron size and smaller, a million times smaller than a meter in diameter - one particle at a time, all the way around the world.

ROISIN COMMANE: At the moment we're a fair few hundred miles to the west of California. We're heading north, crossing over the state of Alaska.

LEMOULT: Harvard University research associate Roisin Commane is one of about 40 scientists and crew on this NASA project. They circle the globe for five weeks at a time. This is the second of four trips in all.

COMMANE: I'm looking at the graph here in front of me, and the CO2 has increased a little. The methane is a little up. So this air has come from somewhere. You don't get CO2 or methane coming from the ocean.

LEMOULT: Every half hour or so, the plane drops from about 40,000 feet to just 500 feet over the ocean. At one point, they get a rare opportunity to get a kind of measurement that no one's ever gotten before. On the edge of a storm, they aim for a phenomenon called the warm conveyor belt that moves air and pollution up to the troposphere.

STEVEN WOFSY: We did it.

LEMOULT: That's Steven Wofsy of Harvard, the principal investigator of the mission.

WOFSY: You could detect all kinds of signatures of Asian industrial pollution - carbon monoxide, sulfuric acid, sulfate, all kinds of gunk.

LEMOULT: Computer models show this pollution drifted here from Asia. But only by actually coming here and taking measurements can scientists understand which chemicals are here and how they're interacting with each other to impact the atmosphere and the climate, even in the cleanest areas.

WOFSY: Once it leaves the general area where it's been emitted, we tend to think that it's gone - the solution to pollution is dilution. But it goes somewhere.

LEMOULT: And Wofsy says the atmosphere in remote areas, like here in Alaska, is more sensitive to a small amount of pollution.

The plane crosses snow-covered mountains and reaches the Arctic Ocean, where Wofsy looks out the window in shock. He talks over the headset system with Commane.

WOFSY: There's open water out there. And the ice is hardly - you know...

COMMANE: And the bit that is there looks awfully thin. Most of it's translucent.

WOFSY: I really don't think that's what it's supposed to look like.

LEMOULT: Under a new president who's called climate change a hoax, many of the scientists on the plane who work for federal agencies don't want to talk about what kind of future their research has. But Wofsy takes the long view.

WOFSY: Funding goes up and down. Priorities of the administration or of NASA go up and down. The problems that we're talking about - the scientific problems and their feedback on society are here to stay.

LEMOULT: The flying lab lands in Anchorage, and the scientists pile off, gripping laptops full of fresh data, data that Wofsy says confirms we all share one atmosphere. 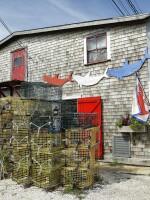 Craig LeMoult
Craig produces sound-rich features and breaking news coverage for WGBH News in Boston. His features have run nationally on NPR's Morning Edition, All Things Considered and Weekend Edition, as well as on PRI's The World and Marketplace. Craig has won a number of national and regional awards for his reporting, including two national Edward R. Murrow awards in 2015, the national Society of Professional Journalists Sigma Delta Chi award feature reporting in 2011, first place awards in 2012 and 2009 from the national Public Radio News Directors Inc. and second place in 2007 from the national Society of Environmental Journalists. Craig is a graduate of the Columbia University Graduate School of Journalism and Tufts University.
See stories by Craig LeMoult
Latest Stories
Support news that matters in Kansas City
KCUR serves the Kansas City region with breaking news and powerful storytelling.
Your donation helps make non-profit journalism available for everyone.
Donate Now