International Workers’ Day, often marked by protests, marches and celebrations by organized labor, may be muted in Missouri this year due to restrictions passed by the state legislature.

Republican lawmakers and Gov. Eric Greitens accomplished their goal of instituting a right-to-work law this year. When it goes into effect Aug. 28, unions and employers won’t be able to require workers to pay dues.  Supporters of right to work say it makes the state more competitive in the business world, but union leaders believe it’ll lead to lower wages.

And on Thursday, Greitens received another bill aimed at limiting union power. Under the measure, which the governor is likely to sign, all state funding would be cut off for local governments that require project labor agreements — or when non-union construction workers must pay union dues when working on a local construction project.

White said this year has also been the worst he can recall for St. Louis area union members losing their lives while on the job. There’ve been 10, including two Laclede Gas workers who were fatally shot last month.

“It’s been a tough year,” White said. “The light at the end of the tunnel is that they may have kicked a sleeping bear.”

That’s because unions believe they’ll have enough signatures by August for a state referendum meant to delay right to work until 2018, when it would be put to a public vote.

“I’m confident that we’re going to overturn the right to work,” White said. “I think a lot of people voted for these politicians, state and national, not knowing what they were going to do to working men and women. I think they were sold a bit of goods and now they’re having buyer’s regret. I think next year we’ll show that at the ballot box.”

The Missouri Supreme Court decided last week not to revisit an earlier ruling that allowed the city to set a higher minimum wage than the state, paving the way for the city’s 2015 ordinance that sets a rate of $10 an hour this year and $11 in 2018.

Fast food workers advocating for $15 an hour and the right to unionize said Friday that going up to $11 an hour will help families pay bills.

May 1 is the traditional union laborers’ day, going back to an 1886 strike for an eight-hour work day. 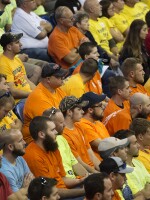 Camille Phillips
Camille Phillips began working for St. Louis Public Radio in July 2013 as the online producer for the talk shows . She grew up in southwest Missouri and has a Master’s degree from the Missouri School of Journalism, University of Missouri-Columbia.
Latest Stories
Hey, thanks for reading.
KCUR serves the Kansas City region with essential news and information.
Your donation today keeps local journalism strong.
Donate Now
Related Content