Some residents of Key Largo are being allowed back in Tuesday morning, but the Florida Keys are still largely without power, water, medical service and cell service. Most Keys residents are anxiously waiting to hear when they can return home, and others who stayed despite mandatory evacuations remain stranded there. More than 80 percent of customers in the Keys are currently are without power.

The Keys received some of the worst of Hurricane Irma's wind and rain as the storm reached the U.S. mainland. The Federal Emergency Management Agency estimates that 25 percent of the homes in the Florida Keys have been destroyed and 65 percent have sustained damage.

It is now virtually impossible to reach much of the area by car. From a flyover aboard a Coast Guard C-130 Monday evening, extensive damage to the Florida Keys could be seen, particularly on Marathon Island. Houses were wrecked, roofs ripped off.

Rear Adm. Peter Brown described "significant house damage," trailer homes "heavily damaged" and "a number of boats that had been tossed about, some still on water and some thrown up on land."

Mobile home parks in particular were devastated, with trailers flipped over and tossed around. Boats are capsized, and many have broken free of their moorings and been thrown ashore. A few cars could be seen driving around on the streets, including a solitary vehicle traveling west from Marathon along the Seven Mile Bridge.

There are now reports that people may need to be evacuated off the islands because it could take weeks to restore water and power. The Defense Department has moved the USS Abraham Lincoln to help with those evacuations.

The mood is tense in the mostly deserted parking lot of the Homestead-Miami Speedway — police are diverting people who are trying to get back to the Keys there to avoid traffic from building up at a nearby roadblock. There are no services, but some people, like Key Largo resident Mark Schweiss, decided to camp out anyway.

Schweiss evacuated to Orlando during the hurricane and then drove back south to try to get back to his home. The frustration that he is not allowed back in can be heard in his voice. He says his house is OK and the road leading to it is passable.

"The weather people said it was coming down my driveway for three days. You know, I'm not stupid, but I thought I could get back," the 42-year resident of the Keys said. "I'll never leave again."

Despite a lack of services and a sundown-to-sunup curfew in Key West, there were a number of civilians seen driving and walking around the island.

In a driving tour of the area surrounding Naval Air Station Key West, many roads could be seen blocked by trees and downed power lines. Less sturdy buildings lost roofs or had doors blown in. At a gas station, the canopy and pumps were crumpled into a heap.

Republican Rep. Carlos Curbelo, whose district includes the Florida Keys, said aboard the plane Monday that "it's clear that there's a lot of work to be done and this community's going to need a lot of support." He added that there are some "logistical challenges" in getting goods and services to the Keys. At a news conference Monday afternoon, he called for a "robust" funding plan for FEMA and said Congress can't fund FEMA "month to month."

"To see the Florida Keys dark so to speak, as such a vibrant exciting part of our country that I'm blessed to represent," Curbelo said, "to just see everything at a standstill, and Key West as a ghost town, that was very striking for me."

Innkeeper Rachel Price evacuated to Cincinnati but has seen photos of her destroyed inn on Facebook. "Pretty much the entire first floor of my hotel is gone," she told NPR's All Things Considered. "And the part that faces the ocean has two huge holes on the ocean side."

She has owned the teal White Sands Inn in Marathon, Fla., with her mother for 18 years. "My pool is pretty much — most of the beach is inside the pool. ... It just looks like it's covered completely with sand."

"It was heartbreaking," she adds. "I kind of expected it, but to just see [the photos] — really heartbreaking."

Price says she does want to rebuild — but for now she is anxiously waiting to find out the timeline for roads to be cleared and gas to be restored so she can return. But her first priority, she says, is to get on the phone and start informing her guests and canceling reservations.

"All our guests are our family members," she says. "You know [we will] rebuild it better, get them back. They like to call it their little paradise." 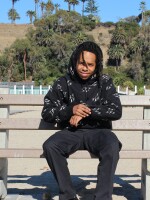 Kirk Siegler
As a correspondent on NPR's national desk, Kirk Siegler covers rural life, culture and politics from his base in Boise, Idaho.
See stories by Kirk Siegler 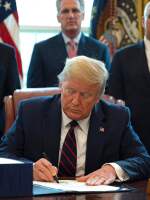