In Florida, Felons Want Voting Rights Back As Soon As They Complete Their Sentences

On most days from 8 a.m. to 8 p.m., Mary Grimes can be found pacing along a crowded street in Orlando, Fla., with clipboards in both hands.

"Can I have five minutes of your time?" the 58-year-old says to a parade of passers-by. Those who are in a rush, she quickly wishes well; the others, Grimes directs to a blue and yellow form, reciting her spiel and soliciting a signature from each.

For several months, she has made her living this way. She transforms public parking lots, city parks and sidewalks into a home office from which she urges registered voters to endorse proposed constitutional amendments.

But for her, this is more than a way to pay rent.

"This is what I'm really praying for," she says pointing to a stack of yellow petitions inside her bag one afternoon outside Orlando's downtown public library.

Thousands of petitions like these are circulating across Florida in an unprecedented grass-roots campaign to restore voting rights to the state's more than 1.6 million felons who have completed their sentences. This includes Grimes. At 17, she was sent to prison for a burglary. Although she has served her time, Florida law has barred her from participating in municipal and presidential elections for the past 41 years.

According to The Sentencing Project, a voting rights advocacy group, disenfranchisement laws have kept 6.1 million Americans from voting, and Florida is home to the largest concentration of them: 1.68 million, or 27 percent.

Florida's law permanently strips felons of the right to vote and other civil rights, including serving on a jury, running for public office and sitting for the state bar exam. Similar laws are on the books in Iowa, Kentucky and Virginia. The law requires that felons who have served their time and want their rights restored petition a clemency board consisting of the governor, the attorney general and two Cabinet members in a convoluted and subjective process that could take years.

Florida's law and its lengthy clemency process, born out of the Reconstruction era, have disproportionately kept African-Americans — many of whom have committed low-level offenses — disenfranchised for decades. Under Florida Gov. Rick Scott, 2,807 people have had their voting rights restored out of more than 29,611 cases the clemency board had reviewed as of Oct. 5.

Those cases include Desmond Meade, who heads the Florida Rights Restoration Coalition. He waited five years for a response from the clemency board and was denied on the grounds that he had petitioned too early.

"This is an issue that has consumed every part of my life," says Meade, a law school graduate who is ineligible to practice because the law prohibits him from taking the state bar. "I thought that it is better for me to concentrate on changing these policies or finding a different way than to rely on this old policy that says basically that I'm not going to get an opportunity."

Ten years ago, Meade launched Floridians For A Fair Democracy and the Say Yes to Second Chances campaign with the help of citizen-led initiatives and advocacy groups, including the American Civil Liberties Union and the Florida League of Women Voters. Their mission has been to put an end to Florida's clemency process and automatically restore voting rights to felons who have served their time for nonviolent offenses.

In March, the campaign reached an unprecedented milestone when volunteers gathered the 68,314 signatures required to trigger a review of the proposed constitutional amendment by the Florida Supreme Court. The court unanimously approved the language that will ultimately appear on the ballot and, if voted in, will appear in the Florida Constitution.

Howard Simon, executive director of Florida's American Civil Liberties Union, was part of the group that helped write the ballot language. The process took nearly a year and a half of researching and framing clear and concise language.

"I feel very good about the fact that even in a politically and ideologically divided Florida Supreme Court, they found the ballot language to be clear and consistent with constitutional principles, and they did so unanimously," he said. "That, I think, is a big shot in the arm for this movement."

The next step in the potential overhaul is to submit the required 766,200 signatures before Feb. 1 to be eligible to appear on the midterm election ballots. For the law to pass, 60 percent of voters have to support it. The sheer volume of petitions needed, coupled with the fact that state law prohibits felons from signing petitions, has led the Florida Rights Restoration Coalition to solicit help from petition-gathering companies. This approach is similar to past efforts that have led to major overhauls of state law, including the medical marijuana amendment and fair districting.

If you live in Florida, sign the petition to restore formerly incarcerated individuals' right to vote: https://t.co/pUv68wkSLY https://t.co/KkpTMXimht

In the past year, the effort has drawn the attention of celebrities such as musician John Legend, financial contributions from donors across partisan lines and $5 million toward mobilization from the American Civil Liberties Union. For Simon, it is the largest contribution he can remember in his career with the organization.

"This is the unfinished business of the civil rights movement here in Florida," Simon says. "We are the world's — not the nation's — but the world's epicenter for taking the vote away from people, and I think people have come to recognize more and more that it's wrong."

Ahead of the November 2016 presidential election, felons in Florida drew attention to their inability to participate in the process. Since then, support has grown exponentially into what Meade calls "a cornucopia of citizens" impacted by an issue that transcends partisan and racial lines, age and gender.

"We've had someone as old as 97 years old collecting petitions, and as young as 9 to 10 years old. We've had Latinos, We've had whites. We've had blacks. We have conservatives. We've had progressives. We've had independents. We've had people who may not even have a political preference but just believe that people should have their ability to vote restored. They're just coming from all over."

The campaign will continue with days of action across the state, with more than 300 volunteers coming together at churches, in shopping plazas, and even house parties. Then, there are petitioners like Mary Grimes, who will endure the Florida heat in a bandanna and sunglasses and walk from sidewalk to sidewalk to ask passers-by for a minute of their time.

Many will ignore her and some will stop, and she'll keep going.

"I'm not worried because somebody's going to listen, you feel me?" she says.

Renata Sago ( @RenataSago) is a general assignment reporter for Marketplace. 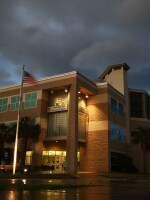 Renata Sago
Renata joined the WVIK News team in March 2014, as the Amy Helpenstell Foundation Fellow. She anchors during Morning Edition and All Things Considered, produces features, and reports on everything from same-sex marriage legislation to unemployment in the Quad Cities.
See stories by Renata Sago
Latest Stories
Support news that matters in Kansas City
KCUR serves the Kansas City region with breaking news and powerful storytelling.
Your donation helps make non-profit journalism available for everyone.
Donate Now