In one week, outdoor enthusiasts converged on two very different trade shows in two cities. The Outdoor Retailer and Snow Show in Denver, Colo., and the Great American Outdoor Show in Harrisburg, Pa., offered a portrait of a complex and divided American conservation movement.

The divisions began with the overtly political. The Outdoor Retailer show changed locations this year over a bitter dispute about public lands policy.

We want to ... challenge the show to continue to be vocal about public lands, on climate change and other important issues we face.

"The show is in Colorado for a reason, and it left Utah for a reason," said Scott Braden, wilderness and public lands advocate for Conservation Colorado, one of several environmental nonprofits hosting a party on the eve of the show's public opening. Partygoers sipped microbrews, kombucha and distilled Patagonian spirits. The show floor featured skis, technical hiking clothing and all manner of outdoor chic.

"We want to welcome the show, but also challenge the show to continue to be vocal about public lands, on climate change and other important issues we face," Braden said. On the stage, Colorado Gov. John Hickenlooper touted the state's push to install electric vehicle charging stations.

The Outdoor Retailer and Snow Show announced the move last year after a dispute with Utah's governor and congressional delegation over how to best preserve the Bears Ears National Monument in Utah. Outdoor companies including Patagonia and Black Diamond Equipment advocated vociferously for protecting Bears Ears.

In December 2017 President Donald Trump shrank that monument and Grand Staircase-Escalante by more than half.

"We need to continue to mature as an industry and take a page from the playbook of the National Rifle Association, and turn public lands policies and championing them into a primary binary voting issue," said Peter Metcalf, retired CEO of Black Diamond Equipment.

A week later, the National Rifle Association opened its Great American Outdoor Show in Pennsylvania. The show is free for new or renewing NRA members, and next to booths selling hunting and fishing gear is a shop where attendees can buy shirts with the words "From My Cold Dead Hands" or tchotchkes that reference the Constitution's Second Amendment.

The show bills itself as celebrating "hunting, fishing and outdoor traditions treasured by millions of Americans and their families."

Many of the exhibitors are professional hunting guides, hoping to book clients who want to venture into the wilderness. For them, the gun lobbying efforts of the NRA are in line with their values as hunters and conservationists: hunters need land to hunt on. "Think about it — we hunters are about guns. We're about our Second Amendment," says Bob Hayes, who makes popular goose and duck callers by hand.

During a seminar on the first day of the show, Chris Ashley, a turkey hunting guide from Mississippi who leads trips all over the country on both public and private land, talked to one attendee looking for new turkey calling techniques he could use on the public land where he hunts.

"You might just have to sit there, be patient a little," Ashley counseled. "You maybe can't be as aggressive about mimicking them if you don't know who else is out there hunting, and if it's not private land."

The attendee nodded, saying he didn't mind being patient. It was nice to be outside.

"Hunters and hikers are totally different," he says, in terms of what they like to do when they're outside. But he doesn't think there needs to be animosity in the outdoor community based on politics or recreation preferences. "There are a lot of people who like to hike in the outdoors, but they don't think it's right to shoot an animal. Or they like riding their bike or whatever. But we both like being outside, like the land."

Indeed, recent polls suggest some middle ground when it comes to conservation and environmental issues. The 2018 Conservation In the West Poll shows a growing number of Republicans and Democrats in the West over the last two years see themselves as conservationists. And most Americans, according to a 2017 poll by the Pew Research Center, believe in protecting the environment more broadly.

In Denver, it's a sentiment echoed by Metcalf, of Black Diamond. He sees room in a divided conservation movement for political unity on land issues that affect everyone. "Whether you're a Republican or a Democrat, you need to support this," he says. "It's a question that the electorate asks of all politicians before they decide whether to even consider them."

A previous version of this story incorrectly stated that the Great American Outdoor Show is free to all National Rifle Association members. It is free only to new members or to those who renew or upgrade their membership in the NRA.

Rebecca Hersher
Rebecca Hersher is a reporter on NPR's Science Desk, where she reports on outbreaks, natural disasters, and environmental and health research. Since coming to NPR in 2011, she has covered the Ebola outbreak in West Africa, embedded with the Afghan army after the American combat mission ended, and reported on floods and hurricanes in the U.S. She's also reported on research about puppies. Before her work on the Science Desk, she was a producer for NPR's Weekend All Things Considered in Los Angeles.
See stories by Rebecca Hersher 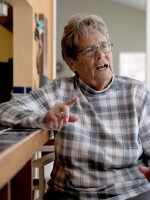