President Donald Trump’s proposed budget for 2019 could bring big infrastructure changes to Missouri, but local engineering and commerce experts say it could be hard for the state to compete for federal dollars.

The budget promises to “generate $1 trillion in infrastructure investment” by dedicating $200 billion over 10 years to projects like improving roads, expanding internet access in rural areas, and developing creative approaches to transit, energy, water and building. Of that, $100 billion would be awarded as competitive grants to states and local governments who pursue projects “demonstrating innovative approaches” to infrastructure.

The renewed focus on projects like failing roads, bridges and rails could lead to necessary improvements, according to Marsia Geldert-Murphey, who directs Missouri’s chapter of the American Society of Civil Engineers.

“We need a robust infrastructure program to address all of the problems that we have with our infrastructure in America that have basically been ignored,” Geldert-Murphey said. Her organization ranks each state’s infrastructure. Missouri received poor rankings in 2013, when the society last evaluated it. “We’ve got bridges and roads that were designed for life-cycles that we’ve passed.”

But Missouri might not have the money to actually secure these federal incentives. Missouri has about $825 million of “unfunded transportation priorities” each year, according to a report released in January by the Missouri Transportation System Task Force, a 23-member bi-partisan research group made up of state House and Senate members, as well as people in the executive branch and private sector. The state has also struggled to match federal funds on highway projects.

“If this split puts a greater onus on the state, we don’t have a sustainable system in place right now,” Geldert-Murphey said.

The federal government currently contributes up to 80 percent of the cost for highway projects. Other mass-transit projects receive around 50 percent. The new budget requires states, and local governments, to develop public-private partnerships and compete for federal money.

Public-private partnerships have led to improvements in St. Louis’ infrastructure, said Hart Nelson, vice president for public policy at the St. Louis Regional Chamber of Commerce. He points to the replacement of the Merchants Rail Bridge, which runs over the Mississippi River, as one example of a much-needed project funded in part through private aid.

But Nelson also said that smaller cities like St. Louis might not be able to compete for the limited federal grants provided by the $100 billion budget.

“The question is, are regions like St. Louis — mid-sized cities — going to be at a disadvantage compared to the Los Angeleses, the New Yorks, where they’re just larger?” Nelson said. “Because of the scale, they’re able to get a greater amount of private funding out the door more quickly when all of us have real infrastructure needs.”

To increase public revenue, the Missouri Transportation System Task Force suggests increasing fees for registering electric vehicles and driver’s licenses. It also notes that despite having the seventh-largest transportation system in the United States, Missouri has one of the lowest gas taxes — and the 17-cent tax rate hasn’t increased since 1996. (Officials say that tax went further in 1996, when it was worth about 27 cents after adjusting for inflation.)

Even if Missouri and its cities could secure federal grants, Geldert-Murphey said that the proposal doesn’t go far enough.

“It is not a significant enough investment from the federal government,” she said. “If our leaders are serious about improving our nation’s infrastructure; it’s not.”

The president’s infrastructure proposal is far from being finalized. Congress must still draft and pass spending bills based on the budget requests. In fiscal year 2018, parts of the proposal did not make it into law. 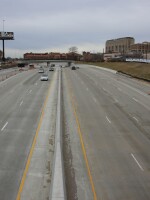 Katelyn Petrin
Katelyn Petrin is a rising senior at Washington University. She has a special major in medical humanities with a minor in classics and writing.
See stories by Katelyn Petrin
Latest Stories
Support news that matters in Kansas City
KCUR serves the Kansas City region with breaking news and powerful storytelling.
Your donation helps make non-profit journalism available for everyone.
Donate Now