Colorado Lawmakers Debate Sexual Harassment And Guns In The Capitol

BENTE BIRKLAND, BYLINE: Colorado's Capitol is known for its gold dome. The granite building sits in the heart of Denver overlooking the foothills of the Rocky Mountains. And like 28 other Capitol buildings across the country, the public can't just walk into the chambers off the street. The building has two metal detectors that lobbyists and other members of the public must pass through.

BIRKLAND: For the first time this year, officers at the checkpoints are requiring people to remove belts.

MIKE BEASLEY: It's easier to get on an airplane than it is to get into the people's Capitol.

BIRKLAND: That's longtime lobbyist Mike Beasley. He's backing a bill that would create a TSA Pre-Check type system for people to bypass security after getting a background check. It's already been done in a handful of other states. Most lobbyists come in and out of the Capitol five to 10 times each day. Combined with school groups and tourists, there are backlogs.

BEASLEY: We're out of balance in terms of security requirements and public safety.

BIRKLAND: Colorado didn't used to have any security checkpoints. That changed in 2007 when an armed man was shot and killed inside the Capitol after he threatened the governor at the time. Lawmakers and other employees can still avoid the metal detectors by entering through other locked doors with a state-issued card. But it doesn't make Democratic Representative Faith Winter feel secure.

FAITH WINTER: We have seen an increase in mass shootings both as schools and public places. When we're on the floor with the balconies, we're sitting targets. This session is especially tense. It's an election year, so it's hyperpartisan. There's a lot of sexual harassment claims.

BIRKLAND: Winter was the first person to come forward publicly to KUNC and then file a formal complaint against a fellow Democratic House member. He may soon face an expulsion vote. Three Republican senators have also been investigated for sexual harassment. There are eight investigations in total. For Democratic Representative Alec Garnett, that's reason enough not to change how people enter the building.

ALEC GARNETT: In this moment, it's kind of a perfect storm of a cultural shift, a lot of tension and then lobbyists pushing a bill to decrease security. And that doesn't make any sense to me.

BIRKLAND: He says adding to his stress is the fact that lawmakers can carry concealed weapons because of a state law that designates the Capitol as their place of business. But for others, that's a comfort. They say gun-free zones are dangerous. Republican Representative Lori Saine says she regularly carries a concealed gun.

BIRKLAND: Lori Saine herself was at the center of a debate over second amendment rights when she was arrested in December at a security checkpoint at Denver International Airport with a loaded gun.

SAINE: I'm like thousands of people across the U.S. that grabbed the wrong bag. And that's what happened. But the weapon was never outside my area of control other than when I put it into the scanner. So the important thing is you do need to keep the weapon under your control at all times.

BIRKLAND: And that hasn't always happened inside the Capitol. Four years ago, a different state lawmaker accidentally left his gun in a committee room. Democratic Representative Jonathan Singer found the gun when he was cleaning up after a hearing and says that incident is one reason he doesn't want lawmakers to carry guns.

JONATHAN SINGER: When you enter a government building, when there are heated vigorous debates and people are on edge, sleep deprived and - you know, let's be honest - there are people in this building who are drinking, that is a deadly mix.

BIRKLAND: The gun policy debate is notoriously heated in this state. Democrats passed stricter gun laws after the Aurora theater shooting in 2012. And it led to the successful recall of two lawmakers. Meanwhile, the Colorado State Patrol has ramped up security in the wake of sexual harassment allegations after a group of legislative aides and interns wrote a letter saying they didn't feel safe. Some lawmakers have also increased their own personal security. For NPR News, I'm Bente Birkeland in Denver. Transcript provided by NPR, Copyright NPR. 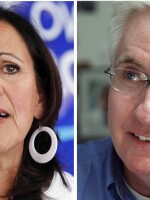 Bente Birkeland
Bente Birkeland has covered Colorado politics and government since spring of 2006. She loves the variety and challenge of the state capitol beat and talking to people from all walks of life. Bente's work has aired on NPR's Morning Edition and All Things Considered, American PublicMedia's Marketplace, and she was a contributor for WNYC's The Next Big Thing. She has won numerous local and national awards, including best beat reporting from the Association of Capitol Reporters and Editors. Bente grew up in Minnesota and England, and loves skiing, hiking, and is an aspiring cello player. She lives in Lakewood with her husband.
See stories by Bente Birkeland
Latest Stories
Support news that matters in Kansas City
KCUR serves the Kansas City region with breaking news and powerful storytelling.
Your donation helps make non-profit journalism available for everyone.
Donate Now