Taja Welton is ready for her daughter to be born. She’s moved into a bigger house, one with room for a nursery. She has a closet full of pink, Minnie Mouse-themed baby clothes. Her baby bag is packed right down to the outfit she plans to bring her baby home in that reads, “The Princess Has Arrived.”

“I can’t wait to put it on her,” Welton smiles. The princess even has a name: Macen.

The only thing Welton doesn’t have in her 37th week of pregnancy is a doctor to deliver her baby. The surprise announcement on April 30 that the hospital here in Kennett, Missouri is closing has left this rural part of southeast Missouri without an OB-GYN. That’s left expectant mothers like Welton scrambling to change their birth plans at the last minute, a dangerous proposition in an area with the worst birth outcomes in the state and one of the highest infant mortality rates in the country.

The hospital in Kennett, Twin Rivers Regional Medical Center, is just the latest (84th) rural hospital in the U.S. to close from dwindling financial margins. Locally, it’s sparked an unprecedented 60 days in this poor, rural region known as the Bootheel. Now five soon-to-be displaced physicians, the State of Missouri and a hospital in a neighboring county are all banding together to keep vital health care services in the area.

Dr. Nelson Perez has been the only full-time OB-GYN in the Bootheel for years. He just came back to work in January after taking six months off to recover from surgery.

“I got carpal tunnel in my hands,” he says while holding them up with a wry smile, “I guess after all those deliveries.”

He’s laughing but he’s not joking. In an average year Perez says he’ll deliver 400 babies himself, about 100 more than the average OB-GYN according to a 2015 survey by the American Congress of Obstetricians and Gynecologists. But when the Kennett hospital closes in July, his practice will close along with it. He spent the first two weeks of May telling his current patients that they need to find a new doctor.

Dunklin County where Perez works is the second poorest in Missouri. It has some of the worst birth outcomes in the state, particularly for black mothers like Taja Welton. Babies die here at twice the national average. One-in-five African-American children are born premature. And that’s with Perez’s practice here.

Perez says he was blindsided by news the hospital would close, even though he sits on the hospital’s board and has served as chief of staff for more than a decade. While rural hospitals across the country have been closing at an alarming rate, he thought being owned by the Fortune 500 Community Health Systems afforded the hospital some security. Plus, he says the hospital turned a profit each year. Not a big one, about $5 million in 2017 he recalls, but that’s better than the 41 percent of rural hospitals that operate at a loss.

It wasn’t enough, Perez concedes, “because on Wall Street, it’s not [whether] you make money or not. It’s that you don’t make enough money for me to invest in you.”

Things have moved quickly since the closure was announced on April 30. He stopped taking new patients the next day. His last delivery was May 16th. On May 17th, his last patient was discharged from the hospital. Taja Welton’s due date was May 26th. By that time, the nearest obstetrics unit will be in the small city of Poplar Bluff, an hour’s drive on winding rural highways. Welton has a car, but many of Perez’s patients do not.

“There’s no infrastructure between Kennett and Poplar Bluff. You have to drive through 10 million small towns on a two-lane road with a river that floods every time it rains,” Perez says. He knows he’s exaggerating, but not by much.

“I have patients that cannot come to my office who live only five miles from here,” he adds, noting how many of his low-income patients don’t have access to a car.

The only county in Missouri with worse birth outcomes is the one right next door: Pemiscot County, the poorest in the state and the other half of the Bootheel. Pemiscot’s hospital, Pemiscot Memorial Health Systems, is just 20 minutes down the road from Kennett’s. And while the two hospitals have been rivals for years, they couldn’t be more different: One owned by a Fortune 500 company, the other by a poor, rural county. One had specialties like obstetrics, while the other ran a bare-bones operation.

In fact, for years it looked like the Pemiscot hospital would be the one to close. They nearly went bankrupt in 2013 and cut their OB unit to save money among other cost saving measures. But now this empty unit in this aging hospital is the only lifeline for Perez’s practice.

“They’re kind of glad we didn’t shut down now,” chuckles Dr. Abdullah Arshad, Chief of Staff of the Pemiscot Hospital.

When he heard the Kennett hospital would close, Arshad had the idea to bring five of Kennett’s soon-to-be out-of-work physicians under the umbrella of Pemiscot Hospital. Together, they could keep vital health care services like obstetrics and urgent care in the area while the community in Kennett raises money to build a new hospital. The trouble is bringing everyone under one umbrella is pricey.

The operating rooms will cost over a quarter million dollars to renovate according to Arshad. The obstetrics unit will cost half a million more. And Arshad says there’s no money to do this.

He says the physicians would be “putting their personal credit on the line” to keep their practices going for the first 60 days. That, plus some help from the state could be enough to pull this plan off, but it’s not so easy.

“They were delivering maybe 40 babies in one year,” Perez recalls of the Pemiscot hospital before it closed its obstetrics unit in 2014. “I deliver 40 babies in one month,” he says, shrugging his shoulders with a grin.

It’s one thing to move Dr. Perez’s practice to the Pemiscot hospital, but to keep it open Arshad says their reimbursement needs to go up. Fast.

“I pleaded with the Medicaid people to please adjust our reimbursement,” Arshad says, “at least for now. This is an emergency.”

Arshad says the state’s Medicaid director has been receptive. So has the director of Missouri’s Department of Health & Senior Services, Dr. Randall Williams, an OB-GYN himself.

Williams is helping the Pemiscot Hospital find the new equipment it needs—like ultrasounds and fetal heart rate monitors—at a steep discount or even donated. The bigger hospitals in cities like St. Louis and Kansas City update their equipment all the time, Williams says, and they put the old machines in storage. Williams is optimistic that some of this equipment could end up in Pemiscot where it's desperately needed to get services like obstetrics up and running. If so, the community will have dodged a bullet.

The news is promising in the long term in the Bootheel, but mothers who are due in the meantime are scrambling.

Taja Welton found a new OB-GYN who could see her in Poplar Bluff. But hours before her first appointment, her water broke. She rushed to the car and drove herself the hour it takes to get to Poplar Bluff blasting top 40 radio and psyching herself up to have a baby.

“I was really nervous,” she remembers from her hospital bed the next day, after 20 hours of labor, with a healthy Macen sleeping by her side. Soon, they’ll go home to Kennett and the princess will have arrived.

Everything seemed to go right for Welton despite her birth plan being messed up. She’s got a car, which many women don’t have. She has a house, a job, and the kind of support system that can help first-time black mothers deliver healthy babies. Until Dr. Perez’s practice opens again in Pemiscot County, he can only hope that other mothers in the Bootheel will be so lucky.

This story was produced by Side Effects Public Media, a news collaborative covering public health.

Bram Sable-Smith
A curious Columbia, Mo. native, Bram Sable-Smith is a reporter for Kaiser Health News. He has documented mbira musicians in Zimbabwe, mining protests in Chile, and the St. Louis airport's tumultuous relationship with the Chinese cargo business. His reporting from Ferguson, Mo. was part of a KBIA documentary honored by the Missouri Broadcasters Association and winner of a national Edward R. Murrow Award. He comes to KBIA most recently from the Salt Institute for Documentary Studies in Portland, Maine.
See stories by Bram Sable-Smith 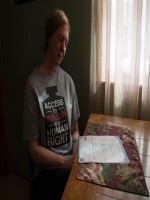