President Trump sure sounded upbeat in Brussels this morning as he was leaving the NATO summit there. He said NATO countries had agreed to his demands to up their military spending.

PRESIDENT DONALD TRUMP: Talked about the expense, the tremendous expense for the United States. And tremendous progress has been made. Everyone's agreed to substantially up their commitment. They're going to up it at levels that they've never thought of before.

GREENE: Well, what a U-turn that was. The president had been calling NATO allies delinquent for not spending enough of their GDP on defense. Some diplomats felt that the message they were getting from Donald Trump was a threat to withdraw from the NATO alliance that has stood for 70 years. We have two people covering this. NPR's Alice Fordham is in Brussels on Skype. That's where the summit was taking place. NPR White House reporter Ayesha Rascoe was in Brussels. She has now moved on to London, which is President Trump's next stop. Good morning to you both.

GREENE: Ayesha, let me start with you. I mean, it is hard to overstate the change in the president's rhetoric. I mean, a tweet from just a day ago - what good is NATO? And this morning, he is saying that NATO is doing great. The U.S. commitment to NATO is strong. What happened here?

RASCOE: It seems like he finally took that victory lap that the NATO allies had wanted him to take about the increased spending that has already happened. And he's taking credit for that. And he - but in addition to that, he had to, I guess, extract some more from the other members of the group. So he says that he has gotten them to commit to move much faster than ever before. And so now NATO is much stronger than it was two days ago. And that's all thanks to President Trump, according to his telling. Of course, the question is...

GREENE: According to him.

RASCOE: (Laughter) According to him. The question is, what exactly was agreed to? He didn't really give any specifics on that.

GREENE: Well, let me turn to you, Alice Fordham, because you've been looking as best you can into what actually was agreed to. Does President Trump have some justification in saying that he got new money out of NATO countries? And then can he really call this a victory lap in some ways?

FORDHAM: Right. Well, you know, actually before the summit even started, David, the secretary general of NATO, Jens Stoltenberg, thanked Trump for his leadership in encouraging countries to set up their defense spending and succeeding in doing so. So in a way, yes, he can claim credit for this because he's already been given credit for it two days ago. What happened today is that the secretary general says there was an extra meeting to discuss what they call burden sharing - who pays for what. This was characterized as an emergency meeting by some people. He said it was just an extra meeting. Stoltenberg said the allies agreed to redouble their efforts. He said that President Trump's approach had lent a new sense of urgency to things. But no more details than that. So details are still emerging. It's not clear what the concrete result was of that meeting.

GREENE: Well, you have the French president, Emmanuel Macron, meanwhile saying that no new commitments have been made - I mean, stressing that the allies had already agreed to pay 2 percent of their GDP by the year 2024. So, I mean, could both Macron and Trump be correct, and they're just sort of emphasizing different sides of this whole thing?

FORDHAM: Absolutely. I think that's part of the reason that Trump was light on details and part of the reason that the secretary general in his press conference right now was light on details. They've agreed certain things. And if anything has changed, they've not given us any specifics right now. The secretary general was also asked, I think, yesterday about the idea that 2 percent of NATO allies' GDP was not enough to be spending on defense. And should there be a discussion of raising it? - which is something that President Trump has suggested, as you say - raising it to say 4 percent. And Secretary General Jens Stoltenberg basically said, look; you know, getting to 2 percent is struggle enough. Let's do that first and then talk about increasing it.

GREENE: Ayesha, let me turn to you. I mean, the president now moving on to London and then to a meeting with Russian President Vladimir Putin in Helsinki - a meeting that NATO countries are obviously going to be looking at and watching closely. The president spoke a little bit about the meeting with Putin this morning. How is he setting it up?

RASCOE: Well, he's basically characterizing it as an opportunity to improve relations. He's saying that he thinks that he might be able to have a good relationship with Putin and that maybe he could even become a friend. He said that he doesn't view Putin as an enemy, but he views him as a competitor. And he's not a friend because he doesn't know him well enough. But whenever he's met him, that they've got - whenever they have met, they have gotten along really well. So he did seem, when it came to Putin, to be less antagonistic than he had been with NATO over the past couple of days. And that has been a real concern for allies - that he'll look very cozy with Putin and not as much with NATO, although he had positive things to say about NATO now.

GREENE: And in the few seconds we have left, Alice, I mean, is it - what would that mean for NATO if we have the image of a U.S. president, Donald Trump, with - looking cozy with Putin in coming days?

FORDHAM: The whole point of NATO is meant to be an alliance. It is meant to project unity, and it's meant to deter people who could be possible enemies and possible aggressors. And NATO in this summit has clearly identified Russia as an aggressor, as something it is worried about. So it wouldn't be beneficial for NATO at all.

GREENE: NPR's Alice Fordham in Brussels. NPR's Ayesha Rascoe in London. Thank you both for your reporting this morning.

FORDHAM: Thanks for having me. 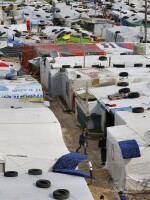