Back in this country now, this week, the Trump administration is moving forward with its controversial push to drill for oil in Alaska's Arctic National Wildlife Refuge. It's holding public hearings on its environmental review of the proposal. Critics, though, say the process is moving too fast. Ravenna Koenig with Alaska's Energy Desk reports.

RAVENNA KOENIG, BYLINE: The public hearings were announced soon after the end of the federal shutdown, and people who came to the first meeting in Fairbanks yesterday said a few days' notice wasn't enough time. Officials gave a slideshow presentation, and the public was invited to leave written comment. But there wasn't a chance to speak to the crowd, which some protesters made clear they didn't like.

UNIDENTIFIED PERSON #1: Have a real hearing.

KOENIG: For decades, drilling in the refuge was off limits. But just over a year ago, Congress made it legal. Sydney Deering thinks that's a positive thing. She's studying petroleum engineering at the University of Alaska Fairbanks.

SYDNEY DEERING: This is a very important event in Alaska's history. We've been trying to get this area open for a very long time.

KOENIG: The oil and gas industry is huge in Alaska, and revenue from it contributes significantly to the state's budget. But others argue that drilling in the Arctic National Wildlife Refuge could pose risks to polar bears, migratory birds and caribou. Sarah James is a Gwich'in elder and leader from Arctic Village, a town south of the refuge. She's concerned that drilling there would hurt the porcupine caribou herd, which her village depends on for food.

DEERING: Officials say their proposals do include protections for caribou. In its broader push for so-called energy dominance, the Trump administration has streamlined its environmental reviews. Some at the meeting said that it's rushing the process. But Joe Balash, a high-level official with the Department of Interior, disagrees.

JOE BALASH: The contention by some of the critics that we're rushing this, I think, is misunderstood. In fact, we're prioritizing this. It is a big deal to this administration to get this done and to get it done sooner rather than later.

KOENIG: More public meetings are planned into next week. The administration's goal is to sell leases for drilling in the refuge by the end of this year. For NPR News, I'm Ravenna Koenig in Fairbanks.

MARTIN: That story comes to us from Alaska's Energy Desk, which is a public media collaboration. Transcript provided by NPR, Copyright NPR. 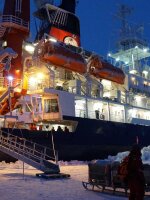