'Prayer Can't Be Our Only Form Of Defense': Mosques Eye Security For Ramadan

The Islamic Society of Colorado Springs meets in a one-story brick building in a residential neighborhood. No domes or minarets. No eye-level windows either.

"We try to get in early on Friday just to inspect the building on the outside make sure everything is fine," he says. "Nothing has been broken into or nothing suspicious."

Elwazeir says usually if he finds objects left at the mosque's door, though, it's flowers or cards of solidarity or condolence — like the ones that poured in after the recent terror attacks in New Zealand.

He tries not to dwell in fear. Still, he says, the mosque has to be cautious.

As the Muslim holy month of Ramadan begins, mosques around the U.S. are preparing to celebrate with recent attacks on synagogues, churches, and other houses of worship still on their minds. They are taking a serious look at security.

Elwazeir pulls out his phone and opens an app connected to several surveillance cameras around the property.

"If there's anything [that] triggers movement in the middle of the night or during unusual hours," he says, "this way at least we'll know."

The mosque has also had a few people stay outside the building during prayer services, he says.

"Many times we have police presence outside," he says, "We have other measures of security it's just, you know, not a good idea to discuss them publicly."

Security is also a concern for the Colorado Muslim Society based in Aurora, Colo., where Iman Jodeh says she's been thinking a lot about safety logistics. She says that attendance dropped off for several weeks right after the New Zealand attacks, but they are back at full attendance now.

"Obviously just understanding how much I am able to divulge to the public around this topic is difficult," she says. "And I have to put the safety of our congregation first."

Jodeh says people aren't letting the recent attacks dull their excitement over celebrating the holy month. "I don't think any amount of violence or threat level will ever be able to take that away from us," she says.

Even as a religious community, we realize that prayer can't be our only form of defense.

And yet, safety is a real concern for the families worshipping here.

"Even as a religious community, we realize that prayer can't be our only form of defense," she says.

They've partnered with law enforcement to get safety training, including active shooter training. And now they've opened those to other religious leaders.

Jay Sherwood, the rabbi at Temple Shalom in Colorado Springs, Colo., and a member of the local interfaith council, says real tangible safety precautions are critical these days. But he says beyond that, ordinary people just need to start standing up for what's right.

And Sherwood says that's a direction in which all communities of faith need to move. 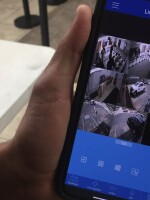 Ali Budner
Ali Budner is KRCC's reporter for the Mountain West News Bureau, a journalism collaborative that unites six stations across the Mountain West, including stations in Colorado, Idaho, Wyoming, Utah, and Montana to better serve the people of the region. The project focuses its reporting on topic areas including issues of land and water, growth, politics, and Western culture and heritage.
See stories by Ali Budner
Hungry For MO returns!
KCUR's podcast Hungry For MO is back with more stories about Missouri’s iconic foods, from barbecue to pizza and beyond.
Subscribe now
Latest Stories
Support news that matters in Kansas City
KCUR serves the Kansas City region with breaking news and powerful storytelling.
Your donation helps make nonprofit journalism available for everyone.
Donate Now