When Hurricane Michael struck the Panhandle of Florida last October, Keith and Susan Koppelman were huddled in the bathroom of their small, two-bedroom rental trailer just north of Panama City.

After four hours, they finally emerged to survey the damage. The storm's 160-mile-per-hour winds had torn off the porch and peeled away the trailer's tin siding.

"It was like an atomic bomb went off," says 52-year-old Susan. Oak trees were lying flat on the ground, and a neighbor was calling for help.

The couple had been living there for only a month and a half, but the damage was so serious that their landlord evicted them to make repairs.

They say they were denied FEMA housing assistance, so they lived in their car while looking for a new place to live.

The Koppelmans are among the tens of thousands of Floridians who have been forced out of their homes since Michael, the strongest storm ever to hit the region. Some are still homeless. Many more have left the region entirely.

Small cities along the Panhandle — a mostly rural region of coast, farmland and timber — are struggling to see a way forward between shrinking revenue and the burden of fronting relief costs. The area's largest employer, Tyndall Air Force Base, is years away from returning to full capacity.

Delaying the recovery is an impasse in Congress, which has yet to pass a disaster relief funding bill — something that normally happens in the weeks following a major storm. To top it all off, the new hurricane season begins on June 1.

Post-Michael, the Florida Panhandle is transformed. The Category 5 storm wiped out thousands of homes across its path: Michael smashed buildings to splinters, tore off roofs and sent trees careening through walls.

With the housing stock decimated, an apartment in Panama City that might once have gone for $500 per month now rents for more than $1,000. The Koppelmans were dumbfounded.

The only affordable situation the Koppelmans could find was an hour's drive from their jobs in Bay County — Keith on a painting crew; Susan, as a community aide at the elementary school on Tyndall Air Force Base.

A homeowner in neighboring Jackson County offered up a room in his own damaged house. There was no kitchen, so the Koppelmans would have to do dishes in the bathroom sink — but they could live there free if they agreed to help take care of the owner's six horses. They took the deal.

Before the storm, they were paying $450 per month in rent. Now, they pay that much in gas every month commuting.

Housing continues to be the most pressing issue.

"Ninety percent of our homes and buildings were damaged," says Mark McQueen, the city manager of Panama City. "That was massive."

In Panama City, the largest and best-funded city in Michael's direct path, the effects of the storm are painfully clear, more than seven months later. Telltale blue tarps cover thousands of roofs, while others are brand new. Most unsettling, many buildings look as though the hurricane struck last week — walls collapsed, windows shattered, trees bursting through.

In Bay County, where Panama City is located, the post-storm housing crisis has been exacerbated by the high percentage of residents like the Koppelmans who are renters. Nationwide, about a third of people rent their homes. In Panama City, it's more than half.

And because of the region's tourism economy, rental properties make up an enormous portion of the available housing — further complicating things when the number of livable units dropped precipitously after the hurricane struck, just as the number of people seeking shelter spiked.

McQueen says Panama City and the rest of the Florida Panhandle need federal assistance to address this crisis.

For its part, the Federal Emergency Management Agency has provided around $116 million in housing assistance for the area. More than 21,000 Florida residents received FEMA rental assistance, though that assistance mostly came to an end in April.

But rebuilding housing stock through HUD grants takes years to complete. The needs of the hurricane-affected region are much more urgent.

Right now, McQueen says, it's difficult to find rooms for workers coming in to repair and rebuild.

The area's economic recovery also depends on the reconstruction of Tyndall Air Force Base. Counting active duty service members, retirees and their dependents, Tyndall accounts for more than 10% of Bay County's population and drives one-third of the county's economy, according to officials.

The eye of Hurricane Michael passed directly over Tyndall, causing catastrophic damage. Every structure on the base was damaged or destroyed.

Even now, the damage is evident. A massive hangar is still missing half its roof. Numerous other buildings stand smashed and ruined by the storm, awaiting demolition.

Operationally, the base is carrying on about 80% of its previous mission, says Col. Brian Laidlaw, Tyndall's commanding officer. But the base is "still very much in recovery mode," he says.

Many base operations are being conducted in temporary modular buildings. The control tower reopened only recently.

The Air Force has made a commitment to rebuild Tyndall, echoed this month by Trump at his rally in Panama City. Officials estimate rebuilding will cost $4.7 billion.

Most of the funding needed to rebuild Tyndall will have to come from Congress. The pending disaster supplemental funding bill contains more than $1 billion for construction and repair projects at Tyndall, along with a second base in Nebraska that was damaged in flooding earlier this year.

Although the Air Force funding was never in question, Congress took months to come to agreements on other contentious issues in the funding bill like money for Puerto Rico recovery and border wall projects. The House is expected to pass the bill in early June. Trump has indicated his willingness to sign it.

Because the bill has been tied up for so long, the base's long-term reconstruction has been delayed. Laidlaw estimates there are roughly 100 projects that the base is "ready to start" but can't until the funds are formally appropriated.

"As soon as the money shows up to start the base rebuild, we're gonna be ready to go. We are ready," Laidlaw says.

For the small municipalities near the base, Tyndall's recovery — including the jobs that go along with it — is one of many things to worry about.

Just across a bridge from the base is Parker, which had 4,500 residents last fall. Since Michael, the city has lost about 15% of its residents. Parker's utility revenue, its main source of income, has shrunk proportionately.

"They've been very kind to us and not forced the issue," he says. "But at some point, the chickens are going to come home to roost."

But Hurricane Michael swept in a mountain of financial and bureaucratic challenges that Musgrave says small cities like his are not equipped to handle: securing debt or lines of credit; filing project worksheets and reimbursement paperwork with FEMA; applying for HUD grants.

"The demands for the paperwork and the procedures and the process on us is exactly the same as it is on a city of 50,000, and they've got the staffing" to support that, Musgrave says. "I've got a city clerk that is doing 12 jobs at once."

For small cities in nearby rural counties, the challenge is even greater. Away from the coast, the Florida Panhandle is rural and poor.

"Most people think Florida is all palm trees and resorts. This is not. This is North Florida," says Craig Fugate, the former FEMA administrator and former director of Florida's state emergency management department.

In Marianna, a city of 6,000 about 55 miles inland from Panama City, Hurricane Michael wrecked the power grid, downed trees and tore off facades along the city's historic downtown.

"We just don't have the resources a lot of communities have," says Jim Dean, Marianna's city manager. The small town can't lean on an Air Force base or beach tourism for economic recovery, or a well-funded county government that can lobby Washington for help as can Panama City and Bay County. Many people work in agriculture or timber. "It's just a bigger challenge for us."

One daunting choice he faces is whether to take on debt to address problems like debris removal more quickly.

The federal government and the state of Florida will eventually reimburse 95% of these costs. But Marianna would have to pay upfront by taking on debt. Reimbursement can take months, even years. All the while, that debt accrues interest — which isn't reimbursable.

Even if the delayed disaster bill passes next week as expected, it will be a long time before those funds reach Marianna and even longer before the city can break ground on any new project. That's a clock that Dean says should have started months ago.

Looking into the future, the long-term financial challenges for small cities like Marianna are considerable: If the population loss is permanent, then tax and utility revenue will drop. School systems are funded per student, so a drop in enrollment could force layoffs and school closures. And if the population doesn't rebound before the 2020 census, the region could lose millions of dollars in federal funds over the following decade.

"This area was already in some cases depressed economically. The storms made it worse," says Fugate, the former FEMA administrator. "Just rebuilding from the disaster will not ensure this community recovers."

"The sun always comes up on the Gulf of Mexico," he says. "They'll eventually recover. But [for] the interior parts of the state, it's going to be a bigger challenge."

Becky Sullivan
Becky Sullivan has been a producer for NPR since 2011. She is one of the network's go-to breaking news producers and has been on the ground for many major news stories of the past several years. She traveled to Tehran for the funeral of Iranian military leader Qassem Soleimani, to Colombia to cover the Zika virus, to Afghanistan for the anniversary of Sept. 11 and to Pyongyang to report on the regime of Kim Jong-Un. She's also reported from around the U.S., including Hurricane Michael in Florida and the mass shooting in San Bernardino.
See stories by Becky Sullivan 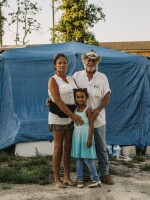 Ari Shapiro
Ari Shapiro has been one of the hosts of All Things Considered, NPR's award-winning afternoon newsmagazine, since 2015. During his first two years on the program, listenership to All Things Consideredgrew at an unprecedented rate, with more people tuning in during a typical quarter-hour than any other program on the radio.
See stories by Ari Shapiro
Hungry For MO returns!
KCUR's podcast Hungry For MO is back with more stories about Missouri’s iconic foods, from barbecue to pizza and beyond.
Subscribe now
Latest Stories
Support news that matters in Kansas City
KCUR serves the Kansas City region with breaking news and powerful storytelling.
Your donation helps make nonprofit journalism available for everyone.
Donate Now