Updated at 9:45 p.m. June 10 with additional comments from Planned Parenthood  —Missouri will continue to have legal access to abortion.

Judge Michael Stelzer ordered the state Department of Health and Senior Services to decide whether to renew Planned Parenthood’s annual license by June 21, when attorneys representing the organization and the state appear in court again.

The judge’s decision means Missouri’s only abortion provider will continue operating while he weighs Planned Parenthood’s objections to the way state health officials have handled the organization’s request for a new license.

Planned parenthood officials and doctors were pleased with the judge’s decision, but again warned that access to abortion in Missouri is in jeopardy.

“Today’s ruling gives doctors like me the ability to wake up tomorrow and continue providing safe, legal abortion in the last health center in the state that provides abortion care,” said Dr. Colleen McNicholas, an OB-GYN and attending physician at the clinic.

“For patients, that means for now, they can continue to make decisions about their bodies, lives, and future in their home state," she said.

In his ruling, the judge wrote that the dispute between state health officials and Planned Parenthood is essentially over whether the state can allow the organization’s license to lapse.Loading...

Stelzer wrote that the proper venue for a review of the state's actions on a license is the Administrative Hearing Commission. But he said that can't occur until the state makes a decision on Planned Parenthood's application for a renewed license, as the commission would need an action to review.

He said the Department of Health and Senior Services must take an official action on the clinic’s application for renewed license so that Planned Parenthood can be entitled to a review of that action.

"The court does not believe an ‘official action’ can include non-action," the judge wrote.

McNicholas said if state health officials heed the judge’s order to decide on the clinic’s license renewal application, there likely will be multiple steps.

“One is simply replying to the plan we’ve provided them,” she said. “It may include another visit to the clinic, we just don’t know. We’re in completely uncharted territory now. We’ve seen the department of health feels like they can navigate this in whatever way they want to.”

In a lawsuit, Planned Parenthood claims that the state is attempting to shut down Reproductive Health Services of Planned Parenthood of the St. Louis Region by “unlawfully” tying the routine renewal of its license to the completion of an investigation.

Citing health and safety concerns at the clinic, state health officials have said they cannot address the clinic’s application for a renewed license until they can interview clinic physicians who work or have worked at the clinic.

Although two Planned Parenthood doctors have spoken to regulators, the department’s efforts to interview independent physicians who work at the clinic have been an obstacle.

Planned Parenthood has said it cannot make those physicians available for interviews and the doctors’ lawyers advised them not to cooperate.Loading...

Stelzer ruled earlier that the doctors did not have to testify in a hearing about the licensing procedures.

State health officials say Planned Parenthood did not agree until late May to comply with revised state regulations requiring that doctors give patients pelvic exams 72 hours before abortions while screening them.

Planned Parenthood doctors say repeat pelvic exams are medically unnecessary and invasive. Doctors also did not follow a state law that requires that the physician who informs a patient seeking an abortion of its risks also performs the procedure until late May, state officials say.

Lawyers for Planned Parenthood told that judge that state officials have unlawfully made the interviews a condition of the license renewal process. They said the clinic must submit to inspections and have an opportunity to correct any problems noted by state inspectors before the department denies it a renewed license.

This is the second time that Stelzer has temporarily extended the St. Louis clinic’s license. The clinic’s license was set to expire May 31. But Stelzer issued a temporary restraining order that day that kept its license in place until he ruled on Planned Parenthood’s request for an injunction.

The legal battle follows a decision by Republican Gov. Mike Parson to sign a law that outlaws abortion after eight weeks of pregnancy.

If the clinic closes, Missouri would become the first state without an abortion clinic. Planned Parenthood officials have said the state is trying to end access to abortion even before there is a challenge to the Supreme Court’s 1973 ruling in Roe v. Wade, which legalized abortion nationwide.

“I don’t think it’s hard to see that the department of health has used the licensing as a weapon of the Republican and conservative government,” McNicholas said.

“The spotlight has traditionally been on legislatures passing really restrictive law and outright bans on abortion,” she said. “[But] this process of using the regulatory oversight and licensing of clinics is actually a more dangerous process because there’s less oversight of those entities, and that really is being driven by politically appointed individuals.” 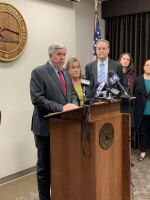 David Cazares
David Cazares supervises coverage of the arts, health and science for St. Louis Public Radio. Before coming to Missouri, he worked as an editor, arts reporter and podcast host for Minnesota Public Radio. He has also worked for newspapers in Florida, Kentucky and Indiana.
See stories by David Cazares

Sarah Fentem
Sarah Fentem reports on sickness and health as part of St. Louis Public Radio’s news team. She previously spent five years reporting for different NPR stations in Indiana, immersing herself deep, deep into an insurance policy beat from which she may never fully recover. A longitme NPR listener, she grew up hearing WQUB in Quincy, Illinois, which is now owned by STLPR. She lives in the Kingshighway Hills neighborhood, and in her spare time likes to watch old sitcoms, meticulously clean and organize her home and go on outdoor adventures with her fiancé Elliot. She has a cat, Lil Rock, and a dog, Ginger.
See stories by Sarah Fentem
Latest Stories
Support news that matters in Kansas City
KCUR serves the Kansas City region with breaking news and powerful storytelling.
Your donation helps make non-profit journalism available for everyone.
Donate Now
Related Content