Nearly 2,000 cities, towns and counties across America are currently participating in a massive multidistrict civil lawsuit against the opioid industry for damages related to the abuse of prescription pain medication. The defendants in the suit include drug manufacturers like Mallinckrodt, wholesale distributors McKesson and Cardinal Health, and pharmacy chains CVS and Walgreens.

Evidence related to the lawsuit was initially sealed, but The Washington Postand the Charleston Gazette-Mail successfully sued to have it made public. Pulitzer Prize-winning Washington Post journalist Scott Higham says the evidence, which was released in July, includes sworn depositions and internal corporate emails that indicate the drug industry purposely shipped suspiciously large quantities of drugs without regard for how they were being used.

Higham says one sales director at the pharmaceutical manufacturer Mallinckrodt was jokingly called "ship, ship, ship" by colleagues because of the amount of oxycodone and hydrocodone he sold: "His bonus structure was tied to the amount of sales that he made," Higham notes. "And that was a time when there was no secret about how many people were dying in places across the country, and the opioid epidemic was raging."

Higham and his colleagues at the Post were also able to access data from the Drug Enforcement Agency that trace the path of some 76 billion opioid pain pills sold between 2006 and 2012. In analyzing the movement of those pills, they made a gruesome discovery.

"When you line up the CDC death [by overdose] database with the DEA's database on opioid distribution, you see a clear correlation between the saturation of towns and cities and counties and the numbers of deaths," Higham says. "A lot of these towns and cities, small cities and counties in places like Ohio and Pennsylvania have just been devastated. ... The death rates just soared in those places where the pills were being dumped."

On the picture emerging from recently unsealed DEA database

A lot of people thought they knew that their communities were being saturated by these opioids, but I don't think they really knew the extent of the saturation, and who was responsible. So this database pulls the curtain back on that for the first time. We obtained data that goes from 2006 through 2012. So over that seven-year period ... you can see exactly which manufacturers were responsible, which distributors were responsible, and which pharmacies were responsible. And we took that database and we turned it into a usable, public-facing database, so now anybody in the country can go onto our website and they can see exactly what happened in their communities. ...

Dozens and dozens of local news organizations have done stories about their own communities — which companies flooded their communities with pills, which pharmacies were responsible for dispensing the most tablets of oxycodone and hydrocodone. Those are the two drugs that we looked at, because they are the most widely abused drugs by addicts and by drug dealers.

On the communities that were flooded with opioids

It's just heartbreaking to see these once thriving communities. They're almost like zombielands, where people are just walking around in a daze and picking through garbage cans and falling down, and overdosing in public parks and inside of cars and inside of streets and on street corners. It's a very upsetting scene that's happening. ...

These communities need help — desperately need help. Their hospitals need help. Their foster care agencies need help — because so many parents have perished and their kids have no family or [are] being raised by grandparents. Police departments, paramedics, fire departments that used to fight fires all the time now are fighting against the opioid epidemic and carrying Narcan with them, which is an overdose reversal drug, and "Narcaning" people all day long.

On "pill mills" that popped up in Florida, where people could get opioids from corrupt doctors — and then resell them on the street

All of a sudden, all these drug dealers realize that there was another way to peddle these pills, and they began to open up these so-called pain management clinics, and most of them were in South Florida, heavily concentrated in Broward County, which is where Fort Lauderdale is. ... These things ... were basically storefront operations in strip malls where you had corrupt doctors and rogue pharmacists working hand in hand inside of a store. So on one side of the store you'd come in, you'd get a cursory examination, the doctor would write you a script. And you literally go next door and get it filled. And these places just became huge open-air drug markets. The parking lots were filled with people who were driving down from Kentucky and West Virginia and Ohio to pick up their prescriptions. And along the highway that goes up through Florida, I-75 and then also I-95, a lot of these storefronts began putting up billboards along the highway at exit ramps saying, "Pain management clinic, next exit."

Amy Salit and Seth Kelley produced and edited the audio of this interview. Bridget Bentz and Deborah Franklin adapted it for the Web. 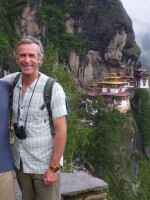