For Many Authors, Celebrity Book Clubs Are A Ticket To Success

Discoverability. It's a word that people who market and sell books use when talking about one of their biggest challenges: With hundreds of thousands of titles released each year, how do readers find the books that publishers want them to buy?

Word of mouth is the old standby. Media interviews are a big help. Book clubs can go a long way to boosting sales. Put those all together and you get celebrity book clubs, which are increasingly seen as a ticket to success.

It all began with Oprah, who said she wanted to "get the whole country reading again" when she introduced her on-air book club back in 1996 — and launching previously unknown authors onto the bestseller lists. A new version of the club started in 2012, using social media as the main platform, and now there's a whole range of book clubs led by celebrities: Actress Emma Watson has a feminist book club. Just-retired NFL quarterback Andrew Luck's club is aimed at getting young people to read. Tonight Show host Jimmy Fallon jumped on the bandwagon too, with his Summer Reads book club.

"In today's media market there are lots of options," says Kristen McLean, a book industry analyst with NPD BookScan, which tracks the sales of print books at major U.S. retailers. "There's a lot of types of media and entertainment that are competing for people's attention," she says, "and so having prominent influencers recommend books is very helpful to those books reaching their audience."

She points to one of the latest entries as an example: Jenna Bush Hager's book club on The Today Show. She recently announced her August pick, Nicole Dennis-Benn's novel Patsy, to excited cheers from her audience. McLean says the first five books chosen by the "Read with Jenna" book club saw a significant boost in their sales. "We've seen these books overperform about 500% compared to the rest of the market for fiction during that time. So that's a very healthy performance."

It's too soon to have the numbers for Patsy, but Dennis-Benn is excited for her book's prospects, "It's every writer's dream, I won't lie about that," she says. "It's really a dream come true, to have this happen, to expose more individuals to the Patsies in our society." She adds that many of those who will now read the book might never have been exposed to a character like Patsy, an undocumented immigrant to America who leaves her child behind in Jamaica to pursue her dream of fortune and romance with another woman. "You know when you're writing, you're not sure who you're gonna be connecting to," Dennis-Benn says. "You just know that you're writing for yourself. And you're hoping that somebody gets the message. And so when these people who have a platform pick our books, it means it's gonna be read widely."

"One of the things we are really happy about is when we find a book where the sentiment of the community is, 'I would never have found this on my own,'" says Sarah Harden. She's the CEO of Reese Witherspoon's production company Hello Sunshine, and she says Witherspoon's hugely influential book club grew out of the actress's genuine love of books. "She's a passionate reader, and she started posting photos of books she was reading to her Instagram. Sometimes she posts a few books a month, and then a couple of months would go by. But that's how it happened, very organically."

The book club launched officially in June 2017, and it now has 1.1 million followers on Instagram. Witherspoon has picked 26 books, and according to BookScan, those titles sold almost 700% better than the average. 21 of her picks were fiction, and they accounted for 2% of all fiction sales during that time period. Witherspoon's recommendation helped turn one debut novelist's book into a genuine phenomenon: Delia Owens' Where the Crawdads Sing has sold more than 1.3 million copies and has been sitting at — or near the top of — all the bestseller lists for almost two years. Like many of the books chosen, it is a debut novel written by a woman — which Sarah Harden says reflects the club's larger mission. "Our decision and our focus with Reese's book club is to the find and champion narratives where women are not the side characters. They're driving the action, they have agency, they're complex, they're flawed. And that's just the focus of our company."

That would be Witherspoon's company Hello Sunshine — even before before the club started, she looked to books for properties to produce, most notably HBO's Big Little Lies. Several of her book club picks have already been optioned for film or TV, including Celeste Ng's Little Fires Everywhere, which Witherspoon will star in along with Kerry Washington. Harden says the show has a built in audience, "because we've got a following of dedicated fans. They love Celeste Ng and they love this book."

And if the book brings fans to the show, the show is very likely to bring more readers to the book, says BookScan's Kristen McLean. "Once that film project hits the market, there's a whole other wave again of awareness and promotion and marketing, and the book, again, will come right back onto the bestseller list.

McLean calls it a 360 degree deal where everybody wins — celebrity, author and fans.

Tom Cole produced this story for radio, and Petra Mayer adapted it for the Web.

In previous audio and Web versions of this story, NPD BookScan was incorrectly referred to as NDP Bookscan. 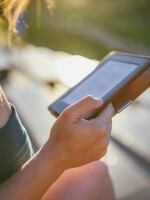