Most people who don't know jazz can probably recognize the name of one of the genre's best singers: Ella Fitzgerald. Fitzgerald is one of the eight women at the center of this season of NPR Music's Turning the Tables, and she's arguably one of the most important vocalists not just in jazz but in the entire history of American music. With an exceptional vocal style, supreme technical capabilities and a spirited energy, she was "The First Lady of Song."

By 1960, Fitzgerald had become a global sensation. That February she gave an unforgettable performance in West Berlin for an audience of thousands. On the set list was "Mack The Knife," a huge hit first made popular by Bobby Darin and Louis Armstrong. Fitzgerald sang the song flawlessly until about halfway through, when she forgot the lyrics. But she didn't stumble — instead, she playfully freestyled her way to the end with nonsense syllables and improvised words — the singular jazz style called scatting. This unforgettable and Grammy Award-winning performance demonstrated her masterful grace under pressure.

Later in the set, Fitzgerald showed off her scat skills again in her interpretation of "How High The Moon." Considered to be one of the best scat solos ever recorded, it demonstrates her sharp vocal control, perfect intonation and rhythmic acumen. Besides its musical excellence, the performance also revealed her ironic sense of humor and gift for "quoting," or referencing other songs while improvising. Jazz critic Will Friedwald says Fitzgerald was the all-time master of quoting. He remembers he once "went through the song bar by bar and pulled out 50 songs that she quoted in, like, five minutes. Just incredible the way her mind works!"

While her musicianship was legendary, what may be most important is the legacy she's left for the vocalists who followed. Before Fitzgerald, singers weren't considered musicians the same way instrumentalists were; at that time, "the only requirement for a vocalist was to sing the lyrics," says singer Charenee Wade. But Fitzgerald proved that singers were capable of the same level of artistry as any other member of the band. Wade continues, "I'm just thankful that she did that for us. She created a pathway for vocalists to be a part of what I consider to be all the fun." 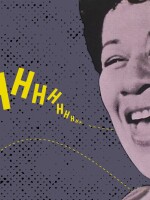 Suraya Mohamed
Suraya Mohamed is a three-time Peabody Award-winning producer, sound designer and editor. She currently serves as the project manager for Jazz Night In Americaand is a contributing producer on the Alt.Latinopodcast .She also produces NPR's holiday specials package, including Tinsel Tales, Hanukkah Lights, Toast Of The Nation, Pink Martini's Joy To The World: A Holiday Spectacular and most recently Hamilton: A Story Of US.You'll also find her work on the Tiny Desk series as either a producer or engineer.
See stories by Suraya Mohamed
Latest Stories
Support news that matters in Kansas City
KCUR serves the Kansas City region with breaking news and powerful storytelling.
Your donation helps make non-profit journalism available for everyone.
Donate Now