Jack White And Brendan Benson On The Raconteurs' Return

We recently sat down with Jack White and Brendan Benson to talk about their long-standing friendship and mutual admiration. It all began in the late '90s where, before The White Stripes took off, Benson was the first of their peers in the Detroit garage rock scene to get signed to a major record label. Benson shares what happened when he tried to help give White's then-burgeoning band a boost.

Help Us Stranger marks the first Raconteurs album recorded at White's studio in Nashville and the band's first since Benson got sober. White discusses reining in his unbridled onstage energy when recording with a band and reflects on his tendency to make jokes that can get him into trouble with the media. White and Benson also share the advice they would give to their younger songwriter selves. Hear it all in the player. 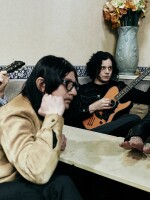 Talia Schlanger
Talia Schlanger hosts World Cafe, which is distributed by NPR and produced by WXPN, the public radio service of the University of Pennsylvania. She got her start in broadcasting at the CBC, Canada's national public broadcaster. She hosted CBC Radio 2 Weekend Mornings on radio and was the on-camera host for two seasons of the television series CBC Music: Backstage,as well as several prime-time music TV specials for CBC, including the Quietest Concert Ever: On Fundy's Ocean Floor. Schlanger also guest hosted various flagship shows on CBC Radio One, including As It Happens, Day 6and Because News. Schlanger also won a Canadian Screen Award as a producer for CBC Music Presents: The Beetle Roadtrip Sessions, a cross-country rock 'n' roll road trip.
See stories by Talia Schlanger 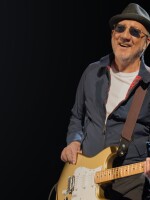