Editor's note: This story is part of a collaborative-reporting initiative supported by the Pulitzer Center on Crisis Reporting. All stories can be found .

When the U.S. Supreme Court ruled earlier this year that police had to abide by the Bill of Rights when they seize property from people, Rep. Shamed Dogan, R-Baldwin, thought he finally had the momentum to reform civil asset forfeiture and end what he calls “policing for profit.”

He thought he would be able to stop Missouri police from pulling over motorists, seizing cash without a crime and keeping the money for departmental expenditures.

But Dogan was deeply disappointed by the end of the 2019 Missouri legislative session. A quiet lobbying campaign by law enforcement killed his reform and accused him of being “anti-police.”

No police officer or prosecutor testified in public against Dogan’s bill. But their behind-the-scenes lobbying prompted Rep. Holly Rehder, R-Sikeston, chair of the House Rules Committee, to kill the bill. Rehder did not respond to requests for comment.

Dogan, a libertarian Republican, has been trying to reform civil asset forfeiture for years. He wants to remove the incentive for police to seize cash they can spend on departmental expenditures.

Dogan thought he would prevail after the U.S. Supreme Court ruled last February that Indiana and all other states had to follow the Eighth Amendment in asset forfeitures. Justice Ruth Bader Ginsburg, writing for a unanimous court, said the “excessive fines” protection of the Eighth Amendment applied to the states. The court thought Indiana police may have imposed an excessive fine on Tyson Timms when they seized his $42,000 Range Rover after arresting him for a drug crime that had a fine of $10,000.

If the Supreme Court was frowning on police seizing a $42,000 car in a criminal case where the owner faced a $10,000 fine, surely the court would say Missouri police were violating the Eighth Amendment when they seize millions of dollars from citizens who were never charged with crimes or found possessing drugs. Or so Dogan thought.

Trying to close the federal loophole

Dogan asked his House Special Committee on Criminal Justice to close the loophole Missouri police and prosecutors use to circumvent state law on asset forfeiture so they can keep the money seized from motorists instead of turning it over to schools.

Missouri law seems to set a high bar for police to seize property. It permits the state to seize cash from citizens only if there is a criminal conviction. In those cases, there needs to be proof beyond a reasonable doubt — or 90% or more certainty — to bring the conviction. Once a person is convicted, the property the police seized goes to schools.

But police can sidestep those requirements by sending the money to the federal Equitable Sharing program. If a preponderance of the evidence — say, 50.1% rather than 90% — links property to a crime, police can route the cash through the Justice Department and get 80% of it back to spend on things such as jails, surveillance equipment, military-style vehicles or police headquarters — but not on schools. All it takes to reach that 50% threshold is for a drug dog to sniff cash and alert that the money has been near marijuana. That’s enough for the police to seize the property, even though in a court of law this would not be considered reliable evidence.

Dogan’s bill would have shut off the federal loophole and forced police to follow the state law, which requires convictions — not just suspicion — and which transfers property to schools.

That change would have put a big dent in some police budgets. In 2018, police around Missouri reported to the state auditor’s office that they seized $9 million. St. Charles County, which has about 27 miles of Interstate 70, and Phelps County, which includes about 30 miles of Interstate 44 near Rolla, seized the most of all Missouri counties. Their police departments collected about $5 million, combined, in a total of about 60 highway stops. Those departments received most of that money back through Equitable Sharing.

For a brief time, it looked like Dogan might pull off his reform. His committee, which included former law enforcement officials, passed the bill unanimously.

But then the police chiefs, sheriffs, drug task forces and police and prosecutors from St. Charles County and across the state began to show up in Jefferson City. They didn’t officially testify against the bill or make public statements, but their message was clear: Dogan and anyone else who supported his bill was anti-police and soft on the war on drugs.

“The forces who are opposed to this in law enforcement,” Dogan said, “dig into their talking point that this will somehow hurt law enforcement’s ability to go after drug traffickers, which is in no way, shape or form true. We are talking about cases in civil asset forfeiture where, by definition, there are no criminal charges filed.”

Police “say we’re doing this to stop drug trafficking, but [they’re] not prosecuting them for drugs,” he said.

Rep. Rehder, chair of the Rules Committee, didn’t allow Dogan’s bill to go to the House floor. “I had a lot of back and forth with Rep. Rehder,” Dogan said, “because she took their side. I was told to compromise. I went to the various organizations, and they wouldn’t compromise.”

Dogan had proposed less-sweeping reforms in earlier legislative sessions. Those changes would have allowed police to use the Equitable Sharing loophole in cash seizures above $50,000 or $100,000. That would have still permitted police to keep most of the cash seized, but it would have taken away the incentive to stop people with smaller amounts of cash, the largest number of people stopped. Had Dogan’s proposals gone through, police would have seized money from fewer people, but they still would have acquired most of the money they now receive.

But police groups said no to those proposals.

“It is frustrating because they didn’t make those arguments publicly,” Dogan said. “We had hearings on the bill like we did on anything else. They didn’t come in droves and testify against it.

“It’s just frustrating in a year like that, when we thought we had a lot of momentum, that they were able to lean back on those same old tired arguments about drug traffickers … and they got offended when I use the phrase ‘policing for profit.’ But I don’t know what else you call it when you have police who refer to it as ‘pennies for heaven.’

‘“I always go back and say, ‘If you are really after going after drug traffickers first and foremost, why don’t you seize their drugs instead of seizing their cash?’ To me, this is exactly backwards. We need to stop the dangerous drugs that are going into our communities,” he said.

“That is the exception rather than the rule,” he said in an interview. "It is very, very scary when idealistic people in our Legislature use extreme examples and use that as a justification to change the rules when they really don’t understand the practicalities of it and the realities of it.”

Lohmar said police would have to give back a lot of the criminal proceeds they seize on the highway if they had to go through the state procedure of obtaining a conviction in every case. For every extreme example like the Indiana one, Lohmar said, there are thousands of legitimate seizures that involve criminal activities.

If police had to rely on the state forfeiture program, police are going to have to release “these criminals with $10,000 in drug proceeds and give that money right back to them and they just go free."

Instead of giving the money back to the drug cartels, Lohmar said, police and prosecutors make good use of the funds for equipment, anti-drug programs and for training. St. Charles County Bureau of Administrative Services Capt. Chris Hunt agrees that the money the county gets back from the federal government is important to funding departmental needs.

That reflects the views of police brass and prosecutors around the state. Phelps County is another jurisdiction that has benefited from forfeiture stops. Their police department has used that money to build a county jail, a police shooting range and buy an assortment of equipment.

“What we use it for is typically training and equipment," such as radios, cameras, guns, ammunition. “Before we got in this asset forfeiture thing, we were driving cars that had 300-400,000 miles on them,” Lisenbe said.

Lohmar disagrees with critics, such as Dogan, who say police focus too much on cases where marijuana is the drug connection in a cash seizure. Lohmar points out that transporting marijuana across state lines still is a crime.

Dogan objects to the emphasis on marijuana over more dangerous drugs.

After last year’s experience, Dogan held hearings in St. Louis and Kansas City on civil asset forfeiture and racial profiling. He is still working with allies on possible legislation.

Civil asset forfeiture is a “longtime scourge of mine, because it turns the Constitution on its head and the concept of innocent until proven guilty, which you really don’t get in cases of civil asset forfeiture. Most Missourians and most Americans don’t realize it’s even a possibility for law enforcement to seize your property and you have to prove your innocence to get it back.”

Correction:Capt. Chris Hunt is commander of the Bureau of Administrative Services in St. Charles County. A previous version of the story misidentified his jurisdiction.

William H. Freivogel is a professor at the Southern Illinois University Carbondale School of Journalism and an attorney.

Mimi Wright is a senior journalism student at the University of Missouri with an emphasis in magazine writing. She is also pursuing a German language degree and a certificate in digital global studies. She has interests in music, education, immigration and international reporting and has previously interned at Spindle magazine in London.

Send questions and comments about this story to  feedback@stlpublicradio.org 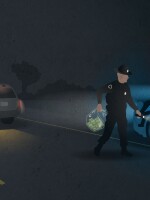 William H. Freivogel
William H. Freivogel is director of the School of Journalism at Southern Illinois University Carbondale and a professor at the Paul Simon Public Policy Institute. Previously, he worked for the St. Louis Post-Dispatch for 34 years, serving as assistant Washington Bureau Chief and deputy editorial editor. He covered the U.S. Supreme Court while in Washington. He is a graduate of Kirkwood High School, Stanford University and Washington University Law School. He is a member of the Missouri Bar.
See stories by William H. Freivogel
Mimi Wright
Latest Stories
Support news that matters in Kansas City
KCUR serves the Kansas City region with breaking news and powerful storytelling.
Your donation helps make non-profit journalism available for everyone.
Donate Now