Kirk Douglas, a Hollywood superstar in the 1950s and '60s, has died at the age of 103. At the height of his career, Douglas played troubled tough guys, including a rebellious Roman slave named Spartacus. Here's NPR's movie critic Bob Mondello with an appreciation.

BOB MONDELLO, BYLINE: He cast a giant shadow, as one of his titles had it, whether playing a craven journalist in "Ace In The Hole," a backstabbing boxer in "The Champion" or a self-destructive cornetist in "Young Man With A Horn," always with a cleft chin, always with a chip on his shoulder. In "Spartacus," through clenched teeth, he took on the whole Roman Empire.

KIRK DOUGLAS: (As Spartacus) Rome. Tell them we want nothing from Rome, nothing except our freedom.

MONDELLO: Off-screen, Douglas also led an open revolt against Hollywood's blacklist. The communist witch hunts of the 1950s had destroyed many careers. "Spartacus" screenwriter Dalton Trumbo had been forced for years to write under an alias. Douglas was disgusted by the hypocrisy, said to hell with it and put Trumbo's name in the credits. When "Spartacus" was a hit, the blacklist was effectively finished. More than three decades later, speaking with NPR's Susan Stamberg, Douglas was philosophical about the decision.

DOUGLAS: If I were much older, would I still have done it? Maybe. Who knows? It was a time I was young, impulsive. Sometimes they say as you get older, you get more cautious. I like to think that I don't, but it could be. Anyhow, I did it. It was an impulsive thing. I'm proud of it. I think it's one of the good things that I've done in life.

MONDELLO: That was the older, wiser Douglas, not the headstrong young star who could be as much trouble as his characters. Though married, he had multiple affairs with the likes of Rita Hayworth, Marlene Dietrich, Ava Gardner. He broke studio contracts, feuded with directors, but onscreen as, say, an abrasive, driven Vincent Van Gogh in "Lust For Life," he was electric.

(SOUNDBITE OF FILM, "LUST FOR LIFE")

DOUGLAS: (As Vincent Van Gogh) When I paint the sun, I want to make people feel it revolving, giving off light and heat. When I paint a pheasant in the field, I want to feel the sun pouring into him like it does in the corn.

ANTHONY QUINN: (As Paul Gaugin) Is that what you think you're doing when you overload your brush? What I see when I look at your work is just that you paint too fast.

DOUGLAS: (As Vincent Van Gogh) You look too fast.

MONDELLO: Kirk Douglas was the last great movie star of his generation. John Wayne, Gary Cooper, Henry Fonda, Cary Grant, his buddy Burt Lancaster - Douglas outlived them all by so many years that younger audiences probably know him better as Michael Douglas' father than as a star in his own right. But he was a star for a long time, among the brightest in the Hollywood firmament. I'm Bob Mondello. Transcript provided by NPR, Copyright NPR. 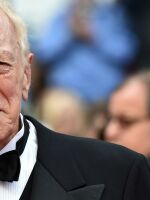