New York Gov. Andrew Cuomo is at the center of attention as the state and New York City have become the epicenter of the coronavirus outbreak in the U.S.

And longtime observers say Cuomo's natural strengths: decisiveness, taking charge, listening to the experts and sticking to the facts — are playing well in a public health crisis.

"He's known as a hard-charging, take-no-prisoners kind of guy," says USA Today network reporter Jon Campbell, who has covered politics in Albany for nearly a decade.

"He likes being in charge. He has no qualms about telling people what to do and saying what he thinks needs to be done."

Followers of New York politics say Cuomo's reputation for micromanaging and being controlling and "rough around the edges" has often been seen as a negative in the past — but in a moment of crisis, he has gained accolades even from some critics for taking bold action.

"He's very much his father's son. He got his start in politics running a lot of the campaigns for his father," says Bob Liff, a former reporter in New York who is now a Democratic political consultant.

In the mid-1980s, after law school in Albany, Cuomo worked as a lawyer before founding a nonprofit organization to help build housing for the homeless. In 1991, he became head of the New York City Commission on the Homeless.

That led him to Washington, D.C., where in 1993 he began working at the Department of Housing and Urban Development as an assistant secretary.

He rose to national prominence when he became the secretary of HUD in the Clinton administration in 1997, where he worked until 2001.

But Cuomo still had his eye on New York. He ran for governor in 2002 but failed to win the Democratic nomination after remarking that the governor at the time, George Pataki, "held the leader's coat" — that leader being New York City Mayor Rudy Giuliani. Cuomo became a "pariah," as the New York Daily News described it. Not long after that he went through a separation from his wife that became fodder for tabloids in 2003.

Cuomo's path back to power came in 2006, when he won his first statewide election, becoming the attorney general of New York state.

Four years later he won election as governor and was reelected in 2014 and 2018. During his time in office, he has trumpeted the passage of measures to legalize same-sex marriage and raise the minimum wage to $15 an hour.

He faced scandal in 2018, when longtime aide Joseph Percoco was found guilty and sentenced to prison on federal corruption charges. Cuomo was not personally accused of wrongdoing, and Campbell says the scandal "never really stuck to the governor."

For Cuomo, the coronavirus pandemic now presents a whole new type of challenge.

"This is the biggest challenge since 1918," Liff says. Two of New York's greatest disasters, Sept. 11 and Superstorm Sandy, "were discrete events. We knew we would come out the other side." With this, he says, no one knows "when it'll be or what it'll look like."

Cuomo has been giving daily press briefings as coronavirus cases in the state and especially New York City rapidly rise. He announced a stay-at-home order on Friday. On Saturday, he said the state was sending 1 million N95 masks to New York City. On Sunday he said he approved four sites for the Army Corps of Engineers to build temporary hospitals.

On Monday, he ordered hospitals to increase their capacity by at least 50% — even as he announced the state's coronavirus cases had topped 20,000.

The briefings and his performance are "getting rave reviews," according to Campbell. "Both from people within his party, [and] even Republicans."

"I've been pretty impressed with how he's dealt with trying to convey accurate information to not just the people of New York state but specifically the people in New York City," says Christina Greer, an associate professor of political science at Fordham University.

It's a contrast to President Trump, who has given messages that have differed from those of health officials and made false claims during the White House's daily press briefings.

"That's the thing that has made so many of [Cuomo's] critics quite impressed," Greer says. 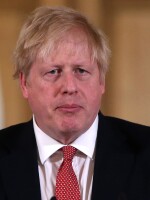 James Doubek
James Doubek is an associate editor and reporter for NPR. He frequently covers breaking news for NPR.org and NPR's hourly newscast. In 2018, he reported feature stories for NPR's business desk on topics including electric scooters, cryptocurrency, and small business owners who lost out when Amazon made a deal with Apple.
See stories by James Doubek
Latest Stories
Hey, thanks for reading.
KCUR serves the Kansas City region with essential news and information.
Your donation today keeps local journalism strong.
Donate Now