The patchwork nature of abortion laws across the Midwest has made the procedure harder for pregnant people to get — and for health care providers to give. Telemedicine rules present especially murky legal territory.

Allison Case, a family medicine physician, spends much of her time working in a hospital where she delivers babies and provides reproductive health care services.

Case lives and works in Indiana, where abortion is now banned with few exceptions. She’s also licensed to practice in New Mexico, a state where abortion remains legal.

Before Indiana’s abortion ban took effect, Case would use her days off to provide reproductive health services, including abortion care, via telemedicine through a clinic that serves patients in New Mexico. Many of them travel from neighboring Texas where abortion is banned.

Some travel solo, she said, others have their children with them.

“Some people are buying hotels, others might have family or friends they can stay with, some are just sleeping in their cars,” Case said. “It's really awful.”

Since Roe was overturned, clinics that provide abortions have seen an increase in demand. Many clinics rely on help from physicians out of state, like Case, who are able to alleviate some of the pressure and keep wait times down by providing services via telemedicine.

But as more states move to restrict abortion, providers are finding themselves navigating an increasingly complicated legal landscape.

Is abortion by telemedicine legal? Depends.

Medication abortions work for most people who are under 11 weeks pregnant, and research suggests medication abortion via telemedicine is safe and effective. Yet many states have enacted legislation to ban or limit access to telehealth abortions.

But it’s not always clear what that means for doctors like Case who are physically located in a state with abortion restrictions, but have a license that enables them to provide care via telehealth to patients in states where it is legal.

Case said she has consulted several lawyers and none of them had a concrete answer for her.

“One lawyer was like, ‘If anyone tells you they think they know [or] they have certainty about this stuff, they're out of their mind’,” she said.

State laws about telemedicine for abortion:

In many states, patients seeking a telehealth abortion have to be physically present in a state where telemedicine abortion is legal, even if it’s just to have a brief virtual consultation with a provider, who may be located in an entirely different state.
Telemedicine abortion providers are finding themselves in a murky legal gray area, having to weigh how much risk they’re willing to assume to care for their patients, or consider halting this aspect of care altogether.

Katherine Watson, a law professor and medical ethicist at Northwestern University Feinberg School of Medicine in Chicago, said this is unchartered territory.

“The stakes are so high. We're talking about something that's a protected right in one state and a felony in a sister state,” Watson said. “And the map is a patchwork. So this is an absolutely radical change.”

“In a draconian enforcement environment, you may not have violated the letter of the law. But creative prosecutors may look for a reason to persecute you,” she said.

There is no slam-dunk argument prosecutors can use, she said, but in a charged political environment, there is a real risk.

Look no further than Dr. Caitlin Bernard, an Indiana OB-GYN who spoke out about a legal abortion she provided earlier this summer to a 10-year-old rape victim from Ohio and was vilified and publicly accused of wrongdoing by the state’s attorney general.

Case works with Whole Woman’s Health, a reproductive health clinic that offers telemedicine abortion in five states: Illinois, Minnesota, New Mexico, Virginia and Maryland. The organization does not have a brick and mortar clinic in some of these places, but it works with providers who have medical licenses there to staff virtual appointments.

Whole Woman’s Health President and CEO Amy Hagstrom Miller said she speaks with providers about the risks they face working for the clinic. She suspects the lack of clarity in state laws is by design, intended to “scare people away from providing safe abortion care.”

The clinic has already stopped working with providers based in Texas because of the way the abortion law there allows for anyone –– even if not personally affected –– to sue anyone who performs, aids, or intends to aid in an abortion. That opens the door for political, cultural and even personal grievances to interfere with health care providers’ work.

“Just because you comply with the law doesn't mean that anti-abortion people won’t come after you and try to vilify you and make your life difficult,” Hagstrom Miller said.

On a day off from her job caring for Indiana patients in late August, Case sat at her laptop as one of her cats nestled in her lap quietly and her first telemedicine abortion patient logged on.

The woman was a pregnant student from Texas who sat in her car. The camera only displayed the top half of her face. She had driven for hours to New Mexico seeking a prescription for abortion pills.

Case walked her through what to expect, explaining that abortion pills stop the pregnancy from progressing and prompt the body to eject the fetus within a few hours.

“It depends on the person, but many people describe it as a heavy period,” Case told the young woman.

The patient wanted a medical note to excuse her from school, but asked that the note not mention that she had an abortion.

It’s women like these who motivate Case to take on telemedicine abortion cases.

But now that Indiana’s abortion ban has taken effect, Case said she will likely stop those services. The risk is too high.

“It really has left me feeling kind of helpless, like I'm not able to help people out. And that's sad."

If providers in these states decide the risk is too high, Hagstrom Miller said, the clinic is ready to divert the patient load to providers in states where abortion remains legal and protected.

For her part, Case said, if the patient volume is high enough, she might consider driving to Illinois to provide those telemedicine services.

“I just think it's a crazy thing to think I will drive one and a half hours to Illinois to use my New Mexico license to help people driving from Texas to New Mexico to get their abortion,” she said. “It's just like madness.”

This story comes from a collaboration between Side Effects Public Media and the Midwest Newsroom — an investigative journalism collaboration including IPR, KCUR 89.3, Nebraska Public Media News, St. Louis Public Radio and NPR. Contact Farah at fyousry@wfyi.org. Follow on Twitter: @Farah_Yousrym. 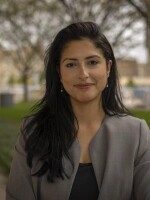 Farah Yousry
Farah Yousry covers health equity for Side Effects Public Media, in partnership with the Indianapolis Recorder. She focuses on healthcare disparities in minority communities across the Midwest. Before moving to the U.S., she worked as a journalist for local news organizations in Egypt during the Arab Spring and the contentious political period following the Egyptian revolution. She has worked with the BBC World Service for more than five years, producing radio, television and digital features for audiences across Europe and the Middle East. Farah speaks Arabic, English and Mandarin Chinese. She can be reached at fyousry@wfyi.org.
See stories by Farah Yousry
Overlooked
A new podcast from KCUR investigating Roger Golubski and corruption in the Kansas City, Kansas, police department.
Subscribe now
Latest Stories
Support news that matters in Kansas City
KCUR serves the Kansas City region with breaking news and powerful storytelling.
Your donation helps make nonprofit journalism available for everyone.
Donate Now
Related Content