Lack of rainfall and water restrictions are two early signs of the future that are causing water worries to bubble up in Lincoln. As drought plagues the state, and with climate change promising more of the same, there is a plan to have a second water supply in place by 2048.

For Nancy Scanlan, co-owner of Trackside Farm in Hickman, Nebraska, water is everything.

It explains why Scanlan, whose farm primarily grows garlic and more than twenty varieties of chili peppers, intentionally set up her operation for a future where drought conditions are the norm.

“When we started Trackside Farm part of our mission was to be very water conscious and to remember that it is a finite resource,” she said. “We all need water.”

So, the farm implemented systems like rain water collection and drip irrigation. And use heavy mulch around plants to keep evaporation to a minimum.

These systems came in handy earlier this year when Hickman, a suburb of Lincoln, implemented a voluntary 10-day water restriction in part due to drought conditions. Residents were advised to reduce or eliminate high water-use outdoor activities and adhere to the city’s alternate watering day schedule.

“We did our best,” Scanlan said. “Some days at market our carrots and beets weren't spotless. Some of our garlic didn't shine like it should with pristine colors showing through its outer wrap layers, because we just didn't want to use the extra water.”

Experts warn water restrictions could become commonplace for cities across the state as drought conditions worsen and rainfall declines. And cities close to Hickman, like Lincoln, are not immune.

Nebraska’s capital is currently experiencing its tenth driest year to date. Its main water source, wells along the Platte River, are becoming less reliable as segments dried up over the summer and were unable to replenish.

In the past, the Ogallala Aquifer, which lies beneath much of Nebraska, provided a respite during dry years, supplying 30% of the country’s irrigation and drinking water. But scientists estimate the section located in Kansas, Oklahoma and Texas, will run out of water in less than 30 years.

The city of Lincoln is already working toward a solution to provide water to its growing population. Current projections show the city will need additional water in 20 to 25 years, but the idea of providing a second source dates back to 2005. The recent drought has only emphasized its importance. So, earlier this year ‘Water 2.0: Securing Lincoln’s Second Source’ was born.

The project, which is advised by a 27-member group called the Mayor’s Water Source Advisory Council, is made up of public stakeholders as well as agriculture and science-related experts to city and state leaders.

One committee member, Lincoln’s director of transportation and utilities, Liz Elliott, has narrowed down the search to seven alternatives to secure a second source of water. Four of the options involve funneling water from the Missouri River. Other options involve expanding an existing group of wells in an underground reservoir, using a water supply lake built next to a river and an interconnect with Omaha Metropolitan Utilities District.

The committee will make its final selection in January 2023, with final implementation, design and construction expected to be complete in 2048. The second source will maintain Lincoln’s current water supply while securing a second source for future generations. The project will prioritize water conservation and stewardship, and give opportunity to other communities to connect to a regional water supply.

For Lincoln Water System customers who are worried about their bills going up to pay for the second source, Elliott said these alternatives being considered will increase future rates, with the advisory council looking into the true cost of each option in the next two months.

“These rate impacts will be part of several factors being considered by the advisory council in their recommendation,” she said. “Once an alternative is chosen by the mayor, a more detailed financial analysis and plan will be developed that includes rates, financing through bonds, and potential state and or federal funding.

As climate change patterns across the country are expected to accelerate drastically in the coming decades, droughts and water restrictions will likely be a new reality. For residents like Zach Renshaw, a law student at the Nebraska College of Law, chair of UNL’s student government’s environmental sustainability committee and member of the Sierra Club Nebraska executive board committee, awareness of the issue now is key in being better prepared for what is to come.

“Lincoln will not be unique in regards to cities implementing restrictions,” Renshaw said. “With water being the source of life, it is going to be imperative that we continue to preserve and find ways to use less water for future generations.”

‘Water is our lifeblood’

Martha Durr, state climatologist for Nebraska and professor at the University of Nebraska-Lincoln’s school of natural resources, says that droughts are a normal part of our climate. Historically, Nebraska has experienced dry periods around every 10 years. But going forward, drought events are generally expected to intensify, with quicker onset and greater magnitude due to climate change and rising temperatures.

“Water is our lifeblood,” Durr said. “It allows us to be the ‘Cornhusker state,’ if you want to think of it in those terms. Both surface water and groundwater play vital roles in our livelihoods providing ecosystem services, modifying the climate through irrigation, it is our source of drinking water, recreation and even power generation.”

For younger Nebraska residents who have grown up with more exposure to the effects of climate change, these prospects are worrying, but not surprising. They’ve watched a bomb cyclone cause $1.3 billion in flood losses, a record-breaking derecho quadruple the number of tornadoes in one month and a deadly wildfire burn through more than 15,000 acres of land. All of which have occurred just in the last few years.

“I think this has been expected, and it is going to get worse,” Renshaw said.

Renshaw, who said his role is to advocate for students, is hopeful that elected leaders will work towards finding a real solution to the water scarcity problem and not just place a band-aid over it.

“Unfortunately, with any of the crises that Lincoln faces, it will point towards whether decision- makers are going to take the very difficult but necessary steps now before we face a true crisis,” he said. “Rather than having decision makers make broad statements as an attempt to assuage the real concerns young people have and then take no substantive action for the protection of this generation.” 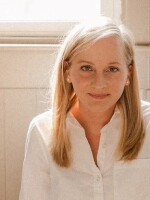 Lauryn Higgins
Lauryn Higgins is a journalist whose work focuses primarily on public health, agriculture and climate change. A native of North Carolina, she now resides in Nebraska.
See stories by Lauryn Higgins
Hungry For MO returns!
KCUR's podcast Hungry For MO is back with more stories about Missouri’s iconic foods, from barbecue to pizza and beyond.
Subscribe now
Latest Stories
Support news that matters in Kansas City
KCUR serves the Kansas City region with breaking news and powerful storytelling.
Your donation helps make nonprofit journalism available for everyone.
Donate Now
Related Content