After counting out the last in a series of chest compressions, Harry Painter Jr. sets up a nebulizer and begins piping oxygen into his patient’s lungs.

“Mr. Jones, you scared us there. How are you feeling?” he asks. The lifelike mannequin blinks back.

Everything around Painter looks exactly as it would in a hospital, but this is a simulation room at St. Louis Community College’s new health care facility on the Forest Park campus.

It’s designed to prepare first-year respiratory care students like Painter for clinicals, which start in the spring. By the end of the two-year program, students will clock 1,000 hours of work in hospitals around the region.

That gives students an opportunity to gain hands-on experience — and employers the chance to recruit much-needed talent. Most students who go through this program secure jobs before they graduate, but there are still thousands of health care jobs going unfilled.

Last year, there were nearly 200 job openings in St. Louis for respiratory care therapists — and 2,000 open nursing positions. St. Louis Community College is expanding and tailoring its programs to fill that need.

This kind of response to a community’s workforce needs has long played a role in the community college model, but a new statewide push aims to make job training a bigger focus everywhere.

Since taking office, Gov. Mike Parson has focused heavily on jobs. Earlier this year, he went so far as to sign an executive order to merge the departments of higher education and workforce development.

She said the change has helped broaden the state’s scope of job preparedness. Previously, she said the education department placed too much emphasis on four-year degree programs as the clear path to a well-paying job.

So about a year ago, she helped launch an initiative called Talent for Tomorrow in order to better understand how the state’s workforce lines up with needs in the job market.

“What we heard around the state and what the data will tell you is we need a much broader set of options, both to meet individual’s needs, but also to meet our workforce needs,” she said.

Two data points in particular stick out to Mulligan: median wages and education levels across Missouri lag far behind other states.

What that tells her is that just getting a job isn’t good enough; the key is to help people develop skills that will prepare them for better jobs. Mulligan said part of the solution is bringing more affordable and flexible educational programs into job centers.

“The reality is without some post-secondary training, those people are likely to be repeat customers, and not the kind of repeat customer you want,” she said. “We really want to get people on a track to training that gets them into a better job and then a little more training and a little better job.”

Mulligan said cost is often the biggest hurdle for people seeking secondary education. That’s why she's also helping spearhead a new financial aid program called Fast Track. It has $10 million in grant money budgeted this year to cover the cost of schooling for adults over the age of 25.

So far, more than 500 people have applied for the funding, which can go toward a certificate, industry credential or a bachelor's degree for in-demand fields like teaching, trades or STEM.

In St. Louis, the health care worker shortage is one of the most pressing workforce needs.

Part of the solution, he said, is to make it easier for people to see long-term careers in health care. That’s why over the next five years, the college will expand its nursing program by 75%.

The other focus is on upskilling workers in the industry. As hospitals compete for qualified talent, many are left to take on entry-level employees who don’t have prior experience in health care. That makes job training critical.

She said filling the workforce gap is a long-term problem, but investments up front in an employee may encourage them to move up to higher roles.

“I do think it will be very beneficial to really invest in our people to create that pipeline so that hopefully we can meet our needs.”

St. Louis Community College student Painter is only a few months into his two-year respiratory care program, but he’s eager to get to work in a hospital setting.

“I’m a very empathetic people person,” he said. “I worked in the restaurant industry for lots of years, and learning how to talk to people is really important in respiratory care.”

For now, he’s practicing on Mr. Jones, the lifelike mannequin, even offering him a glass of water.

Next semester, Painter will have a chance to work with real patients in a hospital. 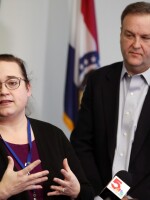