Inside KCUR
Midwest Newsroom
The Midwest Newsroom is a partnership between NPR and member stations to provide investigative journalism and in-depth reporting.

A grant from the Ewing Marion Kauffman Foundation to the Midwest Newsroom collaboration will support two journalism fellows based at the non-profit, non-partisan Missouri Independent.

NPR fellowships offer early to mid-career professionals an opportunity to share their talents and hone their skills while working at NPR and our Member Stations.

With grant funding from the Ewing Marion Kauffman Foundation and support from NPR, the fellows will work alongside journalists at The Missouri Independent, a nonpartisan, nonprofit digital news organization that is part of the States Newsroom network.

"We're excited to partner with Midwest Newsroom and to bring two incredibly talented young journalists onto our team," said Jason Hancock, editor-in-chief of The Missouri Independent. "This type of collaboration between nonprofit newsrooms makes both our organizations stronger."

“We’re building a virtual regional newsroom around a collective mission to provide context and depth, and give voice to people in our region.”

The Midwest Newsroom is a partnership between NPR and member stations in Iowa, Kansas, Missouri and Nebraska that focuses on investigative journalism and in-depth reporting. KCUR 89.3 in Kansas City is the lead station, and the other partners are Iowa Public Radio, St. Louis Public Radio and Nebraska Public Media.

Niara Savage joins the Midwest Newsroom from St. Louis Public Radio, where she worked as the newsroom intern producing stories for the web and for radio. She’s originally from Harleysville, a small Pennsylvania town northeast of Philadelphia.

She is a 2020 graduate of Fisk University, where she studied political science. While a student at Fisk, Niara worked for local newspapers and contributed to the university’s Fisk Political Review.

Her work has also appeared in The North Star, on NPR’s All Things Considered and in the Minnesota Spokesman-Recorder, where she covered education and police reform in the Twin Cities. Savage’s debut Young Adult novel “The Killing of Gregory Noble'' explores the aftermath of racial violence.

Savage spent a year teaching fifth grade in St. Louis Public Schools and is a graduate student studying School Psychology at the University of Missouri-St. Louis. She plans to work at the intersection of journalism and education to help make complex information about education policy, mental health and learning-related issues more accessible to empower families to make informed decisions.

Over the past four years, Samantha covered business and economic issues in Indiana. During her time she’s covered a wide range of topics from genetically modified salmon to the United Auto Workers strike at General Motors.

Previously, she worked as a local general assignment reporter for WNIN in Evansville, Indiana covering local government and breaking news. In 2016, Samantha traveled to Ukraine with co-workers to cover the 25th year of independence for the country. She also worked with Side Effects Public Media reporting on health issues in Southern Indiana and Western Kentucky.

Her work has aired on NPR and garnered awards, including a Regional Edward R. Murrow. A story she’s proud to have covered in her career is the first majority women’s team competing in the Indy 500 and the efforts to diversify the sport.

Samantha decided to become a journalist after interning at WNIN. One of her favorite parts in reporting is talking with people and telling their stories. She believes personal stories can help better understand current issues and policies.

Samantha is from Temple, Texas, but moved to Indiana to study political science, international studies and communication at the University of Evansville. During her time in college she swam for the Purple Aces and worked at the school’s radio station, WUEV. 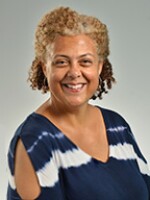 Holly Edgell
Holly Edgell is the managing editor of the Midwest Newsroom, a public radio collaboration among NPR member stations in Missouri, Kansas, Iowa and Nebraska. You can reach her at hollyedgell@kcur.org.
See stories by Holly Edgell
Support news that matters in Kansas City
KCUR serves the Kansas City region with breaking news and powerful storytelling.
Your donation helps make nonprofit journalism available for everyone.
Donate Now
Related Content