Malaria experts have been holding their breath and hoping it wouldn't happen. But it has.

Malaria parasites resistant to the last, best drug treatment, called artemisinin combination therapy, or ACT, are infecting people along the border of Thailand and Myanmar.

This is 500 miles away from the first focus of ACT-resistant malaria in Cambodia. And it's a different form of resistant malaria, which means it arose independently of the Cambodian type rather than spreading from there. We're talking here about Plasmodium falciparum, the deadliest and most common form of malaria.

The discovery ruins the World Health Organization's hope that resistance to ACT might be stamped out for good in Cambodia. Now it's a two-front war.

An international team of researchers is publishing the news in The Lancet.

Meanwhile, many of the same scientists report in Science that they've zeroed in on changes in the parasite's genes that drive this new form of resistance. That gives hope that its spread may be monitored and that new drugs might someday be devised to foil resistance.

But the bad news outweighs the good. The new resistance raises concern that the tantalizing prospect of eliminating malaria might slip away again, as it did when the parasite developed resistance to the drug chloroquine in the 1960s through the 1990s. More than 600,000 people die of malaria each year, but the toll has been falling.

Artemisinin-based therapies are a big reason why the hope of eliminating malaria has been rising. Other reasons are wide distribution of insecticide-treated bed nets to prevent mosquitoes from transmitting the parasite at night, and last fall's announcement that the first large field trial of a malaria vaccine reduced infections by 55 percent.

"Anti-malarial control efforts are vitally dependent on artemisinin combination treatments," write Anne-Catrin Uhlemann and David Fidock of Columbia University in a Lanceteditorial. "Should these regimens fail, no other drugs are ready for deployment, and drug development efforts are not expected to yield new anti-malarials until the end of this decade."

Thus, the new focus of resistant malaria is likely to stimulate urgent strategy sessions about whether it can be contained, as authorities still hope the Cambodian outbreak might be.

Working against that is the fact that the new resistance involves Myanmar, which has a lot of malaria and a weak public health system.

Researchers say that ACT regimens are not totally impotent against the newly resistant parasites. But there has been a rapid increase in what they call "slow clearing" of infections.

The proportion of patients with the slowest response to treatment in western Thailand has increased from less than 1 percent in 2001 to 20 percent in 2010.

The biggest fear is that resistant forms of malaria will emerge in sub-Saharan Africa, where malaria afflicts and kills more people than anywhere else.

Uhlemann and Fidock say malaria fighters are in a race against time. Increased resistance to ACT "emphasizes the need to both monitor for signs of emergence resistance," they write, "and implement all available measures towards malaria elimination while we can." 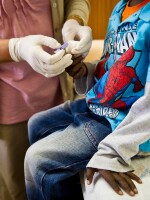