When they travel to London to compete in this summer's Olympics, many elite athletes will be joined by family members. But for Alexander Massialas and his father, Greg, it's different. Both of them will represent the United States — one as a coach, and the other as an athlete.

At 18, Alexander Massialas' passport is thick with extra pages — s­­tamps from Korea, Spain and Germany — the envy of any wannabe world traveler. His homework schedule isn't quite as packed.

And that's reality, when you're going to Stanford University in the fall, you're the youngest-ever U.S. men's foil fencing champion, and you're headed to the Olympics. It takes a lot of travel for competitions, and a lot of practice to stay ranked among the top 15 foil fencers in the world.

Six days a week, you'll find Alexander at his father's fencing club, the Massialas Foundation at Halberstadt. It's a narrow building, wedged between an auto shop and an apartment house in San Francisco's Mission District.

The sound of clashing foils and fast footwork echoes off the high ceilings and wooden floors of the club. Greg Massialas is a three-time Olympian and the U.S. men's fencing team coach.

"I find in some ways it's actually a lot easier than other students," Greg says, "because there's a complete trust in everything I say."

The father and son wear fencing masks and face each other on a strip — the area where fencers compete. Greg runs Alexander through drills from different directions.

"At the club, I'm just any other student," Alexander says. "You know, if I'm messing up, I'm doing push-ups on the floor, too."

The Massialas Foundation has about 60 students; three are going to the Olympics, including U.S. foil team fencer Doris Willette. She's known Alexander and Greg for years.

"Ultimately, Alexander is kind of the epitome of what he tries to teach," she says during a training session. "You know, it's a kind of, you're mixing in feeling the right moment and looking for the right moment, with knowing what you want to do."

In foil fencing, what you want to do is use your weapon to get touches on your opponent's torso. An electric scoring machine beeps every time that happens.

Being able to outsmart and outscore his opponents is what landed Alexander a spot in the Olympics, both on the U.S. foil fencing team and as an individual. It's something he's wanted since his father started coaching him at the age of 7.

"I may not have understood the grandeur of the Olympic Games," he says, "but from the very beginning, I told him I'm going to be an Olympic gold medalist. So you know, that was my goal ever since I was a little kid."

Although his dad says Alexander is a bit of an underdog this time around, he thinks his son could medal.

"The pressure's on his opponents, not on him," Greg says. "For him, he has a chance to go forward and be a champion, and make it happen. His opponents — some of them, this is like their last Olympics."

Going to the games for the first time at the young age of 18 means Alexander could be a three-time Olympian, like his dad. 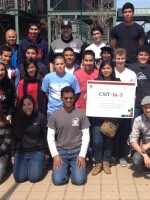 Krista Almanzan
Krista joined KAZU in 2007. She is an award winning journalist with more than a decade of broadcast experience. Her stories have won regional Edward R. Murrow Awards and honors from the Northern California Radio and Television News Directors Association. Prior to working at KAZU, Krista reported in Sacramento for Capital Public Radio and at television stations in Iowa. Like KAZU listeners, Krista appreciates the in-depth, long form stories that are unique to public radio. She's pleased to continue that tradition in the Monterey Bay Area.
See stories by Krista Almanzan
Latest Stories
Support news that matters in Kansas City
KCUR serves the Kansas City region with breaking news and powerful storytelling.
Your donation helps make non-profit journalism available for everyone.
Donate Now