Wild Turkeys Gobble Their Way To A Comeback

Wild turkeys and buffalo have more in common than you might guess. Both were important as food for Native Americans and European settlers. And both were nearly obliterated.

There were a couple of reasons for the turkey's decline. In the early years of the U.S., there was no regulation, so people could shoot as many turkeys as they liked. And their forest habitat was cut down for farmland and heating fuel. Without trees, turkeys have nowhere to roost. So they began to disappear.

By the early 1900s, there were only about 30,000 wild turkeys left in the whole country. Then conservationists went to work and, and after a few false starts, they figured out how to bring the birds back and protect them.

Today, there are nearly 7 million wild turkeys. They are in every state but Alaska and are considered one of the great success stories of wildlife management. Now state offices get calls about flocks of wild turkeys in people's backyards, in front of office buildings, even holding up traffic in rush hour.

Since it's against the law to sell wildlife, turkeys are traded. Say a state has a lot of turkeys but no river otters. That state finds another state that has a lot of otters and needs turkeys, and it makes a trade. A state might exchange 30 turkeys for 10 elk or rough grouse for turkeys.

Turkey hunting usually occurs in spring during the birds' mating season. Only male turkeys can be shot at that time because the females are breeding. Some states have now added fall hunting because there are so many turkeys.

The American wild turkey bears almost no resemblance to its distant cousin, the Butterball. Domesticated turkeys have been bred to have such humongous breasts that they can barely stand up, let alone get off the ground. Wild turkeys run and fly.

Since domesticated turkeys never move, their legs and thighs don't get overly muscled like those of the wild turkey, and remain fat and juicy. Because a wild bird's legs are sinewy from all that exercise, the breast is the best part, but it has a more intense flavor than the supermarket brand.

Oddly, the ancestors of most supermarket turkeys are from Mexico. The Spanish took them to Europe in the 1500s, and the birds became popular all over the continent.

When English settlers came to America, they brought turkeys back to the New World. Those are the turkeys that were developed into today's commercial varieties, completing the turkey's roundtrip. 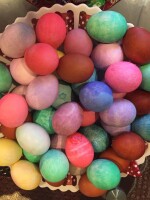 Bonny Wolf
NPR commentator Bonny Wolf grew up in Minnesota and has worked as a reporter and editor at newspapers in New Jersey and Texas. She taught journalism at Texas A&M University where she encouraged her student, Lyle Lovett, to give up music and get a real job. Wolf gives better advice about cooking and eating, and contributes her monthly food essay to NPR's award-winning Weekend Edition Sunday. She is also a contributing editor to " Kitchen Window," NPR's Web-only, weekly food column.
See stories by Bonny Wolf
Latest Stories
Support news that matters in Kansas City
KCUR serves the Kansas City region with breaking news and powerful storytelling.
Your donation helps make non-profit journalism available for everyone.
Donate Now