Singing Loud And Proud: Choir For LGBT Mormons Breaks Out

Growing up in Utah, Ross Owen watched the Mormon Tabernacle Choir on television every Sunday with his family.

"It was almost like watching a rock concert, and I thought, 'Oh, I'd love to do that,' " he says.

But by the time Owen was old enough to join the choir, he was no longer a member of The Church of Jesus Christ of Latter-day Saints; he had been excommunicated after he came out as gay.

"I almost feel like I've been mourning giving up that foundation that was there for me for the first 20 years of my life," Owen says. "So, now I'm searching for that spirituality and how to get that spirituality back in my life."

Today, he's a part of a new choir — one that's open to gays, lesbians and Mormons. The ensemble of roughly 15 members, called the One Voice Choir, is not officially part of the LDS church in Utah, but they've been invited to perform at a Mormon church-sponsored outreach event for the lesbian, gay, bisexual and transgender community.

For their first rehearsal, the group congregated at a historic LDS chapel near downtown Salt Lake City. Bryan Horn, the group's musical director, resigned from the church after coming out as gay, but says he's still a Mormon in his heart.

Catherine Jeppsen, a self-identified ally, accompanies the group at the rehearsal. She's an adjunct faculty member of gender studies at Brigham Young University and says she's met a number of students suffering from a sense of exclusion.

"I just really feel for people who don't feel accepted in the one place they should," Jeppsen says. "And I want to do everything I can to show them that there are people in the Mormon church who do love and accept them, and want them to feel welcome."

Rexene Pitcher, another member of the group, tears up when she talks about her gay son who withdrew from the church when he no longer felt accepted.

"I'm really happy to see people of the Mormon church coming out and saying we love you just the way you are, and being willing to show it," Pitcher says.

"Most people who grow up in the church, when they transition, they just say, 'I'm not allowed to be LDS anymore', and they just give up and walk away," Moore says at a rehearsal. "I want to show people that you don't have to walk away, that just because it can be hard to be LDS and transgender, that doesn't mean it's not worth it."

Before Moore finished his thoughts, an official from the church where the choir was rehearsing requested that the group end practice and leave.

They were told to no longer use that church as a rehearsal space. The local branch president declined to talk about the decision, but said he didn't want the group's presence to become political. Though a church spokesman later apologized to the choir, the doors remain closed.

The rejection was disheartening for Horn, who says it slowed the momentum of the group.

"Honestly, after that I thought about scrapping the whole idea, and I'm like, you know what, that's the sign that God gave me that this is not right at this time," he says.

But luckily, the choir found a new rehearsal home three weeks later at a nearby Methodist church. The group has been prepping for an LDS church event called Outreach Fireside — an occasion Horn notes as a significant stride for the ensemble.

"I think it's showing the church that we're not the enemy. We're just here to sing," he says. "So, the fact that we're being invited to this Christmas Fireside for LGBT Mormons and straight allies, and even curious people who don't know how to handle this topic in the church, it's a great step in the right direction."

Since the choir was formed, the LDS church launched a new website urging Latter-day Saints to reach out more to gay and lesbian members.

A previous Web version of this story incorrectly identified Catherine Jeppsen as a professor at Brigham Young University. Jeppsen is an adjunct faculty member. 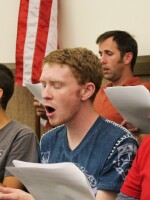 Andrea Smardon
Andrea Smardon is new at KUER, but she has worked in public broadcasting for more than a decade. Most recently, she worked as a reporter and news announcer for WGBH radio. While in Boston, she produced stories for Morning Edition, Marketplace Money, and The World. Her print work was published in The Boston Globe and Boston.com. Prior to that, she worked at Seattleââ
See stories by Andrea Smardon
Latest Stories
Support news that matters in Kansas City
KCUR serves the Kansas City region with breaking news and powerful storytelling.
Your donation helps make non-profit journalism available for everyone.
Donate Now