Mexico Aims To Save Babies And Moms With Modern Midwifery

In Mexico these days, the majority of babies are born in hospitals. That hasn't helped reduce the number of maternal deaths, though. So health officials are re-making the centuries-old tradition of midwifery. They are betting a new kind of midwife, one trained in a clinical setting, can offer a solution.

At a newly opened school in southern Mexico, young women sit up straight in tiny desks and answer their teacher's questions in chorus. Their round brown faces and thick black hair are typical of this mostly indigenous region in the state of Guerrero. Many are the daughters, granddaughters or nieces of traditional midwives.

They are also the freshman class of the country's first public midwifery school.

America Madrid Simon is a slightly shy 21-year-old who sits near the back of the class. "When I first told people I was studying midwifery, they laughed at me," she says. "They said, 'That's for grandmothers.' "

As Mexico's public health system has pushed more and more women to give birth in hospitals, it has created a stigma that midwifery is old-fashioned and has no place in modern medicine. Traditional midwives attend fewer and fewer births. But that strategy hasn't necessarily worked out for the best.

Madrid Simon says her village is an hour and a half by foot from the nearest road. There's a small clinic, she says, but no nurse or doctor.

The village of Tlaquiltzingo is tucked in the mountains of Guerrero. Here, bony mutts, goats and piglets freely roam the dirt paths. People work in the fields and speak Nahuatl, their native tongue.

This is where babies used to be born, into the arms of women like Macrina Martinez, the village midwife. She delivered her first set of twins almost 30 years ago. Today she mostly does home visits before and after a baby is born.

Most women in childbirth are sent to the hospital 30 minutes away. But in an emergency, rugged dirt roads make it extremely difficult to get there quickly. Even women who arrive in time have no guarantee they'll get optimal care.

"What's going on now in Mexico is the majority ... of the hospitals are oversaturated, and so it's a big problem," says Guadalupe Mainero, director of Guerrero's new midwifery school. She says doctors are sometimes overwhelmed by the numbers of normal births, some of which used to happen at home. That leaves them less time to deal with high-risk births. This is where the midwifery school could help.

The students' curriculum marries traditional midwifery with modern medicine. Students learn the old arts, like massaging bellies with long shawls, while also studying gynecology, obstetrics and basic nursing. When they graduate in four years, they'll have a license and be able to work in urban hospitals and rural clinics.

But is Mexico ready to embrace these new professional midwives?

"There's a huge resistance ... to the idea that a professional midwife could work independently side by side and on an equal setting as a physician," says Dr. Dilys Walker, an obstetrician at the University of Washington School of Medicine who has done extensive research in Mexico.

"If you look at the states ... in which professional midwives are working, there's a period of transition and adjustment in which there's a little bit of friction and conflict. And then eventually, they reach this point that there's a very mutually beneficial relationship," she says. "And in the end, the ones that benefit are the women and their babies."

Nationwide reform is still a long way ahead, although there are signs of progress. In 2011 the federal government passed a law recognizing professional midwives as part of the public health system.

And the students in Guerrero are determined to succeed. They know better than anyone the hardships that confront their communities and how they can help. In that way, traditions begun long ago will endure.

This story was produced in collaboration with reporter Lilián López and Round Earth Media's Mexico Reporting Project. 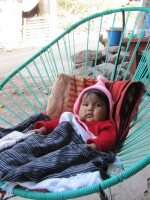