Starbucks netted a record $13.3 billion in 2012. But it isn't immune to competition, so the global coffee seller has updated interiors, offered more products and even tapped into couture fashion.

It recently sold several items designed by the small fashion house Rodarte, including a to-go tumbler for $12.95.

Founded in 2005 by Kate and Laura Mulleavy, Rodarte made a name for itself in the 2010 film Black Swan. Actress Natalie Portman's award-winning portrayal of a ballerina was made even more memorable by her edgy, artsy costumes — designed by Rodarte. Neither Rodarte nor Starbucks would comment for this story.

Starbucks is just the latest mass retailer to jump on this designer trend. Joshua Thomas, a spokesperson for Target, says his company has now worked with more than 100 designers.

"It always starts with the customer at Target," Thomas says. "What have they been receptive to in the past? Where are they at currently?"

The retailer started offering lower-priced versions of designer fashions called Go International in 2006. Suddenly, everyday shoppers could buy clothes by names they had read about on fashion blogs and in magazines. Many of the clothes would sell out on the first day. Target's Thomas says it's about staying current.

One partnership that didn't work out as well as others was Target's holiday pairing with upscale retailer Neiman Marcus.

"When you bring in an outside designer to do something, it's not their name, it's the product, the look, the design and the merchandising," he says.

Some Starbucks drinkers are also price conscious. Last year, Beemer says, a lot of people said they cut out trips to Starbucks to save money.

"I'm sure they've lost some volume because of consumers cutting back, so they say, 'OK, how can I sell more to my customers I currently have?' " Beemer says.

But what's in it for designers? They get money and an introduction to a larger buying public.

But Rodarte clothes aren't easy to find, and industry watchers say the company has yet to find a sustainable market for its artful line. Still, the name has cachet with a certain type of customer.

Target employee Grace Brace, 26, of Minneapolis says the collection didn't make her go to Starbucks any more than usual. But while there, she contemplated buying a mug.

"I almost did yesterday but I didn't, and the store is out of them so I can't today," Brace says.

Unfortunately for Brace, the entire collection has sold out at the Minneapolis Starbucks she patronizes. 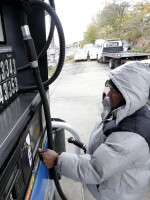 Kaomi Goetz
Kaomi is an award-winning journalist whose love for telling stories began during her childhood in Minnesota, where she spent countless hours writing and illustrating "books" with reams of paper requested from her parents. These days, her focus is decidedly on non-fiction, believing that some of the best stories to be told are true. Her work for the WSHU Public Radio Group is foused on Fairfield County, but she is heard regularly on all of our frequencies as well as on NPR's Morning Edition and All Things Considered. She's also reported for Planet Money, The World, Marketplace, Latino USA and WNYC's Studio 360. Kaomi is a graduate of Columbia University's Graduate School of Journalism.
See stories by Kaomi Goetz
Latest Stories
Support news that matters in Kansas City
KCUR serves the Kansas City region with breaking news and powerful storytelling.
Your donation helps make non-profit journalism available for everyone.
Donate Now