To Combat Suicides, Army Focuses On The Homefront

When Sgt. Brandon McCoy returned from Iraq, he showed signs of post-traumatic stress disorder. His wife, Alicia, remembers him being on edge in public.

Four years later, after he returned from a tour in Afghanistan in 2011, she says, she'd wake up with his hands wrapped around her throat. She told him: Get help or get a divorce. So he scheduled an appointment and — along with Alicia — trekked to the Fort Campbell hospital located on the Tennessee-Kentucky border.

Her husband was given sleeping pills and antidepressants. But more than a year later, he was found dead in a west Tennessee motel room with a self-inflicted gunshot wound to the head.

"I wear his dog tags every day. They were hanging on the rearview mirror in his car," she says. "It is what it is. I can't change what happened."

But Alicia McCoy says more could have been done.

The Army has admitted to being overwhelmed by this multiyear mental health crisis. Military suicide rates have been climbing since 2006, hit a record in 2009 and reached a new high in 2012. Last year, 349 service members — active-duty and reservists — took their own lives.

The Army has been the hardest-hit branch. It concedes a shortage of counselors and psychiatrists. But a recent hiring spree has helped with that, and psychiatrists are now being deployed to Army posts, considered the front lines of the suicide fight. And instead of locating in the post hospital, they're setting up shop where soldiers live and work.

Maj. Ashley Chatigny heads a counseling team situated in a place that soldiers with the 101st Airborne's 4th Brigade walk by every day. Chatigny says soldiers can drop in for a chat any morning without an appointment. Maybe they'll see someone they know, and that's OK. After a decade of war, everyone has cumulative stress.

"It's almost like a street credibility. You bring your buddy in and you kind of see that there's really nothing to be afraid of," says Chatigny.

While it isn't new to have what are known as "embedded" counselors when soldiers are deployed, it is new to have them when they return from war. And because the homefront is where so many suicides occur, the Army is trying these embedded teams stateside, too.

Fort Carson, Colo., was the first, and now more than a half-dozen posts are following suit. Chatigny calls it primary care for the brain.

There's a term used when counselors or chaplains have to swoop in to rescue a suicidal soldier. It's called a "diving catch."

"That's what we're seeing as we stand up the embedded teams, is we are able to prevent more of these diving catches," says Wise.

Wise concedes that it's too early to give all the credit to this effort at making psychiatrists more familiar faces around Fort Campbell. But the post has tried it all: hotlines, buddy systems and training for spouses. In 2009, all combat preparation stopped for days just to focus on suicide prevention.

Alicia McCoy's husband sat through those special briefings and knew the warning signs. Military suicide numbers will determine whether the latest prevention efforts are effective. 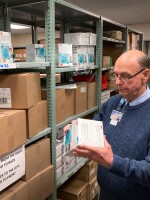